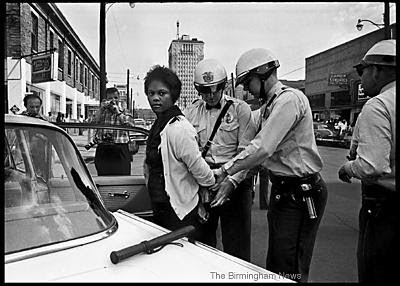 From time to time, I meet a person who sees people of color as victims, as people who have lain miserably on the ground while they have been walked on by people who look like me, as people who have waited helplessly for deliverance engineered by either Jesus or someone else other than themselves. A modification of this type of person is the one who thinks Black people accepted their "fate" under White Supremacy until they "suddenly" leapt to action in the 1960's. And I do not under any circumstances want to reduce or disparage in any way the amazing onslaught against institutional racism that was conducted during that period.

But the fact is that wherever you find oppression, you will find social conflict. No people simply "allows" themselves to be oppressed forever. As a matter of fact, not only did Africans rise up against their European oppressors at every available opportunity from the earliest imaginable beginnings of the organized European attack on African peoples and cultures, but Africans assisted Native Americans in their own resistance against the taking of their lands, as well. (If you want to know more about all this, you might see, among other works, American Negro Slave Revolts by Herbert Aptheker.)
And there are, of course, African-Americans who have absorbed the White Supremacist mentality to the point that they have sold their "soul" (pun intended), if not to the Devil, then to the blue-eyed holder of the power in this country. People that look like me routinely use these folks as "proof" that "Black" people can be successful in our (racist) society or at least can stay out of jail or at least can stop going there eventually when they get their mind "right." Sociologist W.E.B. Du Bois wrote more than one hundred years ago about the "dual consciousness" that the paradigm of White Supremacy visits on people of color, telling them they are inferior so early, so loud, and so long, some come to believe it and then act out of that belief.
But none of this can deny the long-standing resistance by people of color against this immoral, unethical, unjust, and horrifically hypocritical system that continues to thrive economically and politically on the suffering of virtually all people of color in general (in one way or the other) and African-Americans in particular. Charles Dickens wrote of traveling through the southern states in the U.S. in the 1800's that it was like visiting a place in a state of siege, that the dark power White people were using to maintain their control over their so-called "property" was heavily laced with the terror they felt that their property was subject at any moment to rise up and take them to task for their evil. And this fear was based on the fact of permanent and on-going Black resistance--in the form of poisoned "Masters," burned down barns, trickery of the cleverest order, and so forth.
After my presentation on "What is Racism and How Do I Know If I Have It?" last week, I received an email from a Latina student who wrote that all her life, she has believed she was inferior to White people. She didn't know why she was supposedly inferior to White people. She just understood this idea as the truth. After my one hour presentation, she realized that this is a lie, that White Supremacy is an institutional manipulation of culture to maintain a strangle-hold on the power (and the money) in the United States, and that it is not personal. She is not automatically inferior to anyone for any reason and certainly not because she has been born with a particular skin tone or ethnic heritage.
In any case, this week-end, I have been caused to come across a couple of very exciting and very energizing examples of African-American resistance. The first came when I attended a local meeting of a national organization. Now, I've sat in meetings for decades off and on, some fairly meaningful, but often hamstrung by lack of funding, lack of direction, lack of leadership, or whatever. The intelligence and commitment in the room yesterday, however, was so remarkable, I was dumbstruck (not an easy thing to do, as you can imagine). In a matter of ninety minutes, I was asking how I could be of service and was told.
Then, this morning, on my usual rounds of the blogosphere, I dropped in over at Automatic Preference and watched a piece of video that knocked my lights out--or on, as it were. It shows Representative Keith Ellison of Minnesota grilling the federal prosecutor who created the Jena Six disaster.
If you happen to look like me and are unapologetically racist or even suspect that people of color are somehow inferior to you, if you are a person of color and you have been taught to believe that you are inferior to "White" people, or if you are feeling as an anti-racist individual that you are fighting a losing battle alone without the necessary ammunition, I strongly encourage you to watch this bit of film. And then watch it again. And then pass it on. It ain't over till it's over. However long it takes.
Posted by changeseeker at 10:25 AM

Isn't Ellison great? I got mesmerized by that clip when I found it, had to keep watching it. I think I'll look at it again now.

It would be necessary to read many books of history to get the full impact of your letter.
Might I suggest "The Seminole Wars" by John and Mary Lou Missall and anything that can be found concerning Nate Turner and the Slave Revolt. Both will give the reader a sense of the will to resist by people of "color" thought out American history

Excellent article. Especially the bit about your Latina student finally realizing she is not inferior because of her pigmentation. This is something that all non-whites need to become aware of and i'm afraid is not an easy achievement.

Yes, Cero. I'm thinking Ellison is a man to watch. I sure hope so.

Irgum Stern: There are many, many books on African and African-American resistance to oppression in the past and more recently, as well. Your mentioning a couple has inspired me to make a short list to post separately. Thanks.

Blackstone: Greetings and welcome to the blogosphere. You're welcome anytime and I'll be visiting your blog, too. Incidentally, thanks for turning me onto the Noam Chomsky cartoon series. It's hilarious.