The Death of Innocence 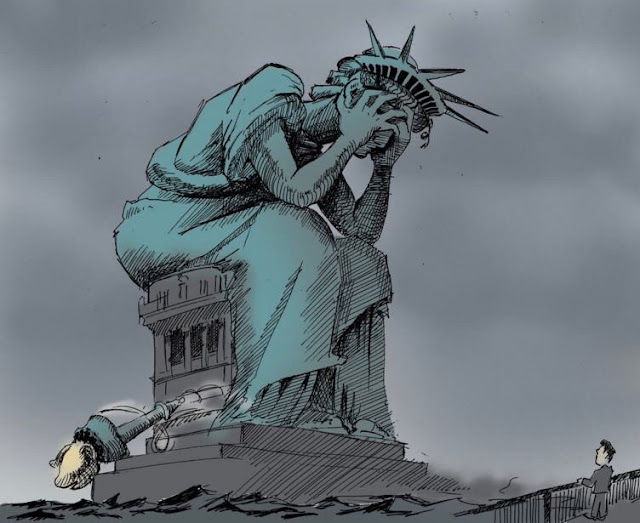 We are standing on a precipice, contemplating our mortality, foot raised to take the next step and hoping it will not come down on a land mine placed there by our own previous hesitation. I walk into classrooms where the students sit in anticipation, dark pools for eyes, red rimmed from crying, or steely-eyed, defensively imagining that I am going to shame them for their choice.

I surprise them both by not talking about the election, but rather talking about the Power Elite, the history of our nation, the ideologies of White Supremacy and patriarchy and capitalism that have always guided both. I tell them this was inevitable and therefore predictable. ("You plant beans, you get beans. No matter what you thought you were planting, we know we planted beans because that's the crop we got.") Nobody did this to us. And we will all suffer.

The steely-eyed lose some of their belligerence and look more doubtful. It is a likelihood they hadn't considered. "Black people, Latinos, Native Americans, immigrants, Muslims, women, LGBTQ people, and poor people -- young and old -- are going to suffer even worse than ever," I say, "But they've suffered before. They know how to do it. They know how to survive physically, psychologically, and emotionally. They are prepared -- well and bitterly prepared -- to face and live through this. But unless you are part of the Power Elite, unless you were born into millions, millions, even if you don't belong to one of those groups, you are going to suffer, too. And you don't expect that. You aren't prepared to understand, accept, or survive it. And how you will respond to your own pain, we cannot know."

"I suspect that those who will suffer most are those like me who are White and professional and have of late been able to pay our bills. We have had the luxury of believing that we are untouchable and we are careening into a time when we will be forced to know in terrifying ways that we are not and never were.

"We are not the first people to face this in history. Read Howard Zinn's A People's History of the United States 1492-Present. Or Open Veins of Latin America: Five Centuries of the Pillage of a Continent by Eduardo Galeano. Or The Rise and Fall of the Third Reich by William Shirer. By the time you finish one of them, let alone all three, you will have long since quit reeling or celebrating and gotten a better perspective on where we are.

"Not only are we not the first people to deal with this situation, but we're not by a long shot alone. People all over the world -- and most particularly in Europe -- are suffering already under the boot of fascism. So this is not really a national dilemma. It is a global one. When there are 85 billionaires who own the same amount of wealth as three billion humans on the planet (the poorest half of the entire human race), would you really expect those 85 billionaires to care what happens to the rest of us? Eighty-five people would fit in this classroom with seats left over. How did they get that rich? What kind of system would allow 85 people to become that rich while the bulk of the human race starves?

"I long to protect you all -- even the ones who don't like me, who don't think I know what I'm talking about, who evaluate me as 'retarted' and 'a traitor to my race,' who say I hate White people, that I hate men, that I make them feel 'uncomfortable' or 'bad about themselves,' that I wish all my students were Black. I long to protect you all from what is coming, but I can't. We are in this now together. We will be tried by fire and when this chapter ends, we will none of us be who we were. Whatever shred of innocence we each once had, whatever cloak of denial we have clung to, whatever desperate hope we counted on to allow us to feel special, will have disappeared forever and we will simply be the latest in a saga of lives unfolding.

"We will play our parts in history and pass on into oblivion with those who've gone before. We have rushed to embrace a time of horror and now we will learn what the cost of our arrogance is. May we meet our collective future open to learning -- finally -- that we stand together, honoring each other's humanity as full citizens or we will none of us be citizens at all."
Posted by changeseeker at 12:07 PM 5 comments: