Taking a Moment to Reflect 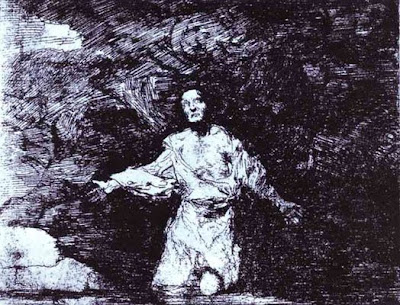 As the old year slips away and the new one slides into place, let's consider this painting by Goya and this line attributed to Rebecca Adamson:

"If we don't change direction, we're going to end up where we're headed."
Nuff said?

"Love takes off masks that we fear we cannot live without and know we cannot live within."
-James Baldwin
I got an email this week that moved me greatly, encouraging me to keep doing what I'm doing on this blog. At the bottom of the email was the quote above. No matter what skin we're in, our culture has socialized us to don masks. They are necessary, we are told. They will protect us from each other, we are counseled. But these are lies, just as the masks are lies, as well.
I wonder what would happen if we could remove our masks at once, if we were stripped naked of all we hide behind. It would be, yes, beyond scary for a minute. But we would see each other and ourselves as we are. And then, finally, we would know peace.
_________________________________________________
The graphic above is by Laurie Cooper and is available here.
Posted by changeseeker at 3:20 PM 7 comments: 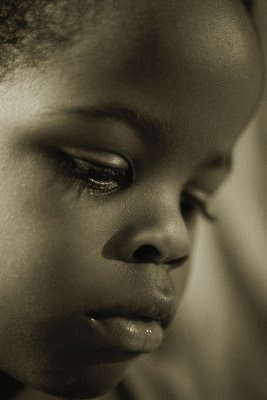 I've pretty much accepted that some White people call me a "race traitor." I don't hear it as often as I hear "she hates White people" or "hates her race" or even "hates herself." But I know the term is out there. And if anybody fits the profile, I guess it's me. It's not hard to cross racist versions of that line once you really get it.

I'm not proud of this. I mean, I'm not a smart aleck. I tell auditorium classrooms full of students that I don't hate myself or my skin or anybody else or their skin either, but White superiority is a lie and White supremacy is fascist bullshit. With or without anything I say or write.
Every once in a while, though, I know I'm about to take most White folks and even some African-Americans to the next level, if I can. And that's what I'm doing today.
Last Wednesday night about 7:30 p.m., two young Black men alledgedly robbed a McDonald's fast food store about thirty miles south of where I live. Not a remarkable occurrance given the fact that young African-American males have been summarily shut out of the job market and not just recently, either. The young Black man who tipped me to the story I'm writing about here the morning after it unfolded, while initially coming across as out of place at the university, adeptly quoted statistics about the odds for him and his brothers as soon as he decided it wouldn't piss me off. They know how it works. And growing up with this knowledge must really take a toll over time.
When I stand up in front of a classroom where a third of the students are young people of color and I say, "According to the U.S. Department of Justice, African-American males born in 2001 have a 1 in 3 likelihood of going to prison," I wince inside. I say it like I'm just rolling off some piece of theoretical information, but I can feel the recoil inside me as I say it, like a pistol shooting into the soft flesh of ethereal bodies arrayed before me. And I hate my job at that moment because I choose to tell the truth no matter what the consequences.
How must it feel to be a young Black man and know that all the odds are stacked against you? You might survive. You might get lucky. You might be one of the two-thirds that doesn't go to prison. You might get a college degree and a good job and a hot car and a beautiful wife. And then you might have sons who make it, too. But...
It's always out there. The Boogey Man of White Supremacy. He rocks Black male babies to sleep at night and slips them the milk of internalized oppression, undermining their faith in life and their belief in themselves and their hope for any future -- no matter how hard their guardians try to protect them. And they grow weaker and more depressed and sometimes more belligerent on that milk. And if Henry Louis Gates can get busted, then what protection is there for a poverty-stricken young Black man in the inner city (or for any young Black man anywhere in the U.S., for that matter)?
When I think about the long, dark road that life in this country has been for people of color and most particularly African-Americans, I stand before the Universe ashamed that I haven't done more than I have. And when I hear that Ronald Darensburg, a young man just barely turned twenty, who was a student at my school until last Wednesday night stuck up a fast food joint at gunpoint and then died in a car wreck trying to flee the police, my heart breaks.

Yes, he could have made different choices. After all, lots of people suffer all over the world without ever robbing anyone. But why is it that we demand as a society that no matter how attacked their psyches are on a daily basis from birth, young Black men must never demonstrate any response to it? While we're busy wanting to hold them responsible for their decisions, when are we going to consider -- at the very least -- the responsibility, as well, of people in a society that hangs these young men out to dry, no matter how hard their families try to come between them and the pain they drown in?
I've been thinking this week that maybe I should have some small cards printed to hand out when I run into White people who ignore what they secretly know and sanctimoniously judge African-Americans, while preening in what they perceive as their White superiority. You know the type. Like the ones commenting on the article about the robbery and the subsequent deaths of two young men and the nightmare of mothers and families who will grieve every Christmas for the rest of their lives. The cards will read simply: "May you be born Black next time."
Posted by changeseeker at 11:50 AM 10 comments: 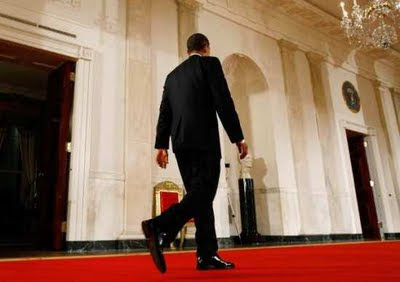 Since hearing that Obama has decided to send an additional 30,000 troops into Afghanistan, I've been thinking about what I could do to express my disappointment. Then, a few minutes ago, I visited a blog I'm partial to and found that Professor Zero had put up a letter to the President this afternoon. Her letter inspired me to come back to Why Am I Not Surprised? and delete fifteen posts published between January, 2008, and January, 2009, focusing on Barack Obama's campaign and election.

I work hard at my posts. They take me hours to write and I often re-write them for days. For me to throw them in a trash heap is the strongest statement I can make. Shame on you, sir. This is not a change. And why am I not surprised?
Posted by changeseeker at 7:06 PM 17 comments:

Remembering a Prince and the Ones Who Took Him From Us When Lawrence Hill Books sent me a copy of The Assassination of Fred Hampton: How the FBI and the Chicago Police Murdered a Black Panther by Jeffrey Haas, I was excited to receive it, but wondered how in the world I was going to find the time to read it in a timely manner at the end of a semester. The book came out, after all, the first of November and technically, this review should have appeared weeks ago. But I didn't finish reading it until last Sunday night and, though it's perfectly kosher to write the review before you finish the book, I couldn't bring myself to do it. The memory of Fred Hampton, a revolutionary Black Panther leader who was brutally cut down even as his star ascended, deserves better. Jeffrey Haas, a European-American civil rights lawyer who cut his legal teeth representing Black Panthers and ultimately helped to win $1.85 million for the survivors of the infamous police raid in Chicago that killed two young Black leaders, deserves better, as well. And anyway, I didn't want to jump ahead to find out how it ended. I wanted to savor every word. It's that kind of book.