Angola Prisoners Refuse To Be Slaves 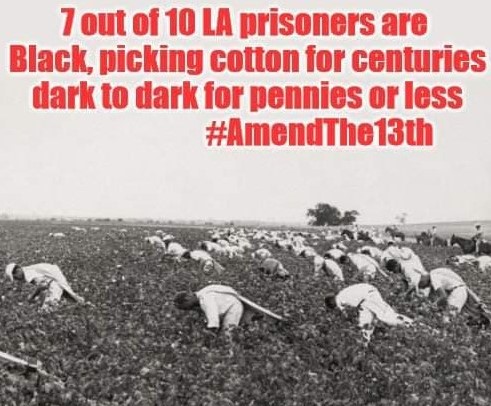 Ten days ago, on May 8th -- the same day a work stoppage occurred just last year -- thirty-eight men in a working cell block at Angola State Penitentiary in Louisiana refused to go to the fields for their work assignment. The men were loaded on a bus immediately and sent to Camp Jaguar, where prisoners are placed in extended lockdown 23-hours per day. To make room for the ones coming in, thirty-eight men who had been housed in Camp Jaguar for punitive reasons were sent to replace the missing workers so the fieldwork could continue as planned. Apparently, this is the new Standard Operating Procedure for such occurrences.

The administration and staff at Angola are heavily populated by second and third generation prisoncrats, not a few of which represent members of extended families whose professional and economic well-being have been built on the backs of the 6,300 incarcerated citizens they presently ride herd on. A goodly number even live on the prison property itself, raising families in the shadows of the gun towers. Guards are called "freemen" (as opposed to "slaves," one must assume). And their future security seems to be assured since the numbers at Angola have risen 1200 since 2010.

Prisoners who have been at Angola for decades have told me that the administration is working hard to suppress organizing activities inside the prison, but that there is more such activity now than there ever has been and it appears to be slowly but surely building. One prisoner suggested that this could be at least partly because "these new young guys coming in have no regard for rules. They're not built for work, so you definitely can't slave 'em. They won't have it."

Asked what might help to address this issue, the prisoner suggested giving them incentives: "More money, more training, more education -- so they can help their families as well as themselves. Putting them into the fields picking cotton in the hot sun just gives them plenty of time to think about how the 13th Amendment of the Constitution actually legalizes using incarcerated citizens as slaves."

Reports from prisoners also suggest that overuse of solitary confinement, health care that amounts to torture, desperately inadequate mental health care (often exacerbated by long-term solitary confinement), and excessive force by guards has created a hostile environment that results in an increasing level of prisoner-to-prisoner violence. Mainstream media rarely are allowed to hear about it, they say. But one prisoner reported this morning that fifteen incarcerated citizens at Angola have been stabbed in the past three weeks alone. "One paranoid schizophrenic prisoner stabbed five people in one day," he said.

Hopelessness haunts the institution that uses solitary confinement at four times the national average and is well known to have kept Albert Woodfox in solitary confinement for forty-three years because of his Black Panther activism in the 1970s. Before he re-entered the free world in 2016, Woodfox forced the Louisiana DOC to sign an agreement not to use solitary confinement punitively in the future, but as he's noted since his release, an agreement and the follow-through are far from the same thing.

Use of the "life without parole" option also creates hopelessness for many at Angola, since Louisiana uses that option at four times the national rate, as well, with the current tally being 5000 incarcerated citizens, many of whom would have been eligible for parole in most other Southern states. This increases their sense that there's nothing to live for and no reason to care about consequences for crimes committed inside the institution. It also increases the likelihood of suicide attempts. "One guy went out to the field this spring and tried to hang himself on the fence," reported a prisoner. "If the other guys hadn't brought him down, he would have died out there."

Decarcerate Louisiana, a movement that's been trying to organize the prisoners in Louisiana for nearly twenty years, has been severely hampered by the lack of public support for the human rights of the state's incarcerated citizens. Members say they've been inspired by the Free Alabama Movement in the past year. Still, members hit the national news a year ago when word of a work stoppage at Angola on May 8th, 2018, leaked to the outside world. And it now appears that at least some of those inside still remember, are still committed, and are waiting for the rest of us to get on board.
Posted by changeseeker at 1:18 PM No comments: 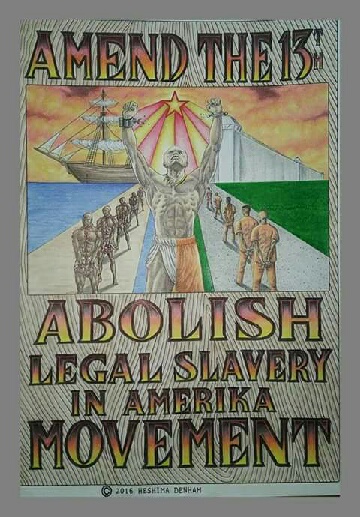 On May 8, 2019, incarcerated citizens at Louisiana State Prison at Angola, their families, and other supporters will mark the anniversary of a nationally-reported* prison strike and work stoppage on that date in 2018, calling the commemoration “Mayday” to highlight the sense that it is a distress call to everyone that believes all people have human rights. Members of Decarcerate Louisiana admit that prison administrators have made limited efforts to address some of the prisoners’ grievances, but little has actually occurred to meet the demands put forward a year ago.

As a result, the members of Decarcerate Louisiana are now renewing their demands as outlined below, while also connecting their struggle to a larger movement for social justice by standing in solidarity with Louisiana state teachers who have been waiting for more than a decade to see their pay reach comparable levels with the rest of the country. While the Louisiana Governor’s office reports that the state spent roughly $12,000 per public school student in 2018, the Vera Institute of Justice reported that the Louisiana Department of Corrections spent more than twice that (at $25,310) per prisoner.

Decarcerate Louisiana, a movement that focuses on the rights of prisoners and their families, originated in Angola, but has since spread to other institutions in the state. Members are pledged to continue to make public their concerns related to, among other things, the use of incarcerated citizens as slaves, which is currently sanctioned by the 13th Amendment of the U.S. Constitution. Decarcerate Louisiana supporters point out that forcing prisoners to work for as little as four cents per hour under the threat of severe punishment, including solitary confinement, is slavery pure and simple and should be abolished completely.

Movements calling for the abandonment of this practice have risen in recent years across the nation, supporting each other and organizing across state borders in an effort to increase public awareness of the issues raised by the wording of the 13th Amendment, which was ratified in 1865: “Neither slavery nor involuntary servitude, except as a punishment for crime whereof the party shall have been duly convicted, shall exist within the United States, or any place subject to their jurisdiction.”

Many believe that this wording was drafted the way it was in order to provide a process to develop a system so a nation that had been widely dependent on the use of literally millions of slaves could continue to access free labor. After the 13th Amendment became law, convict leasing systems quickly developed and then turned into state-run prisons. But more recently, correctional systems in America have added privately-owned for-profit prisons, as well as the widely used practice of making sweetheart deals between prisons and corporations that regularly use incarcerated citizens as workers for a tiny fraction of the cost of workers outside the walls. As if in support of this suggestion, Louisiana Department of Corrections statistics report that seven out of ten prisoners in Louisiana are Black.

Aside from the underfunding of public education which has exacerbated the nationally researched School-to-Prison Pipeline, Decarcerate Louisiana is also concerned and expects to make future statements about the use of excessive force by prison guards, the excessive and inappropriate use of chemical agents, the housing of mentally ill prisoners in situations that routinely become violent and sometimes fatal, the lack of adequate mental health services in general, the overuse of solitary confinement for punitive reasons or no reason at all, the exorbitant cost of the current phone system available for prisoners to remain connected to their loved ones (which is ranked 43rd in the nation in affordability), the more than 7,000 geriatric prisoners that pose no safety problem to the public, and the many prisoners who remain incarcerated despite their being convicted by non-unanimous juries, a practice that is no longer legal.

NOTE: The graphic above is the work of Heshima Denham .