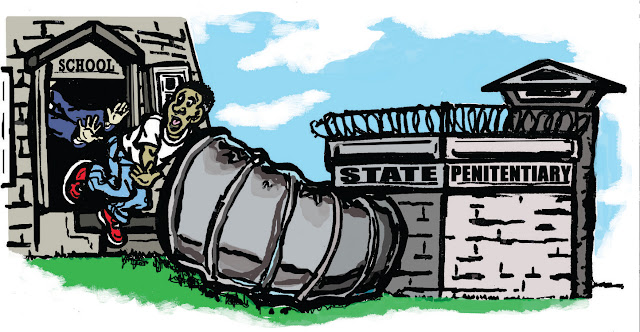 My last post was a video of Michelle Alexander talking about how difficult it is for Black men to avoid going -- and going back -- to prison. Today, I'm posting another video, this time of Alice Goffman talking about the fact that this process doesn't start when Black males grow up. It starts whenever the police in Black neighborhoods say it starts. And because of the nature of these White Supremacist cultural norms, young Black boys and men have little if any control over whether or not they're personally chosen for the journey.

Even a child who makes good grades and tries to stay out of trouble can be swept up at a moment's notice on almost any given day, finding himself neck deep in the nightmare, regardless of his innocence. We like to believe this only happens occasionally by accident, but Goffman describes patterns and processes that are much less predictable. And it is precisely this arbitrary quality that makes life for young Black men so challenging.


Not everybody -- Black or White -- is convinced that incarceration is a problem in the United States. Expensive? Yes. But to many, more of a solution than a problem.

I've known this since the early 1970s, when a reporter dismissed my frantic attempts to generate public concern for prisoners by telling me in no uncertain terms that most people do not and will not care about anybody that winds up in jail. I have since found that to be, by and large, disheartingly true.

Here, lawyer and activist Michelle Alexander explains why she decided to write her award-winning book The New Jim Crow: Mass Incarceration in the Age of Colorblindness and what she thinks we need to understand about the effects of mass incarceration on the Black American community.

Posted by changeseeker at 5:42 PM 2 comments: 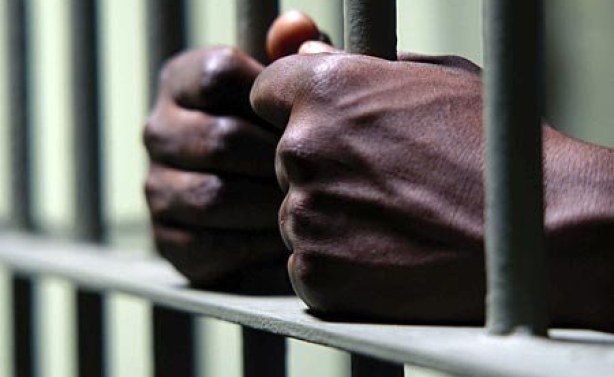 As many of my Faithful Readers know, I've always posted a good bit about prison and prisoners. Ever since I joined the collective at the National Prison Center and the staff of the Prisoners Digest International back in 1971, I've considered myself a member in good standing of the prison abolition movement. I've written for publication about prisoners rights. I went into Ft. Madison Maximum Security Penitentiary in Iowa as a Sealed Revelation Minister with the Church of the New Song. I've testified in court. And I've visited -- or tried to visit -- a number of prisoners in multiple states for a range of reasons.

I've counseled prisoners and ex-prisoners and trained others to have a clue about the issues people deal with when re-entering the outside world. I've written letters to judges that helped people get out or stay out of jail. I've taken endless phone calls and written literally hundreds of letters to people inside. I've done political actions related to prisoners rights, some in groups and some alone. I've supported several long-term political prisoners through their ordeals until they were finally freed (the latest being Albert Woodfox, who was released the 19th of last month after 43 years in the hole). And I scared the be-jezzus out of at least one Federal Chief of Classification and Parole who I sent into an apoplectic fit by telling him -- very quietly, I swear -- that he was going to be held accountable for his cruelty.

So it shouldn't surprise anyone what I'm about to do. For the next few weeks, I'm going to post a whole string of items having to do with the criminal injustice system and most particularly, prison. I've been sitting on some of these things for a while and I have some real beauties in store, not the least of which is the entire report on the 2011 investigation into the alleged misconduct of New Orleans Police Department Deputy Chief Marlon Defillo (which is part of the public record, so it can be published, and believe me, it's quite something).

But before I get into all that, I want to pause a moment and introduce a YouTube video of former Black Panther leader Dhoruba Bin-Wahad speaking at Hamline University in Minneapolis, Minnesota, in 2010. The broad topic is U.S. governmental repression and imperialism, but he drops it into a historical and global context and shows how the U.S. ship of state has used and is using its  power to try to crush opposing forces and individuals, such as Bin-Wahad himself, who did nineteen years as a prisoner in New York before he was exonerated and freed in 1990. I'll warn you in advance that it's ninety minutes long, but if you'll watch the first ten minutes, I guarantee you'll watch the rest and very likely in one sitting -- the way I did.

Law enforcement and the criminal injustice system are the line between the public and the state. Bin-Wahad's presentation is the perfect introduction to a month of examining that line.

This is what I woke up to on Facebook this morning -- a video of a fire that had been set in the Holman Correctional Center in Atmore, Alabama. And I'm sure most viewers in the United States will look at this, shrink back from the screen, and shake their heads, saying, "That's why they're in there. They're right where they belong. We don't want them out here with the rest of us..."

But I'm reminded of something I wrote for the Prisoners Digest International back in 1973 when the prison in McAlester, Oklahoma, went up in flames. I am reprinting it here dedicated to the men in the HCC who are, I'm sure, this morning suffering greatly and as far as I'm concerned through no fault of their own.

"Burn, baby, burn!" and the smoke rolled out -- for forty miles you could see it touch the clouds. "Those animals," says Mrs. Johnson, six miles down the road. "They're burning tax dollars of hard-working citizens!"

They're burning your heart, not your cash, Mrs. J. They would set you on fire along with the "overworked" attorneys and underpaid prisoners' rights groups and pompous, phony legislators and silent ex-prisoners and uncaring mothers and hot-pantied girl friends and all the rest of those millions of hard-working, tax-paying citizens who sit on their hands 'cause it feels so good and suck Uncle Sam's tit when they can't reach his crotch.


Sit down, thirty-one-sixty-nine-twelve, you're trying to thaw out a freezer with a three-thousand-mile diameter. Why can't you learn to sit on your hands, too? Society wants you. It has big plans for its prisoners...

Listen to the smoke, folks. Listen to the smoke go forty miles or forty years or forty more lives -- you do remember Attica? How strange. Then how many Christs will it take to satisfy the God of the People? How many nails can you drive into somebody's brain before you puke, Mrs. Johnson? Two? Ten? A thousand? Maybe more! You have a strong stomach, America, but a weak backbone.

S-he whose Spirit does not burn will lose their bodies to the flames and finally get just what they earn with sniveling, groveling, sweetheart games.

Play on, America -- McAlester Atmore burns.
Posted by changeseeker at 10:00 AM 3 comments: