The Battle of Portland From Inside: Coming Soon To A Downtown Near You? 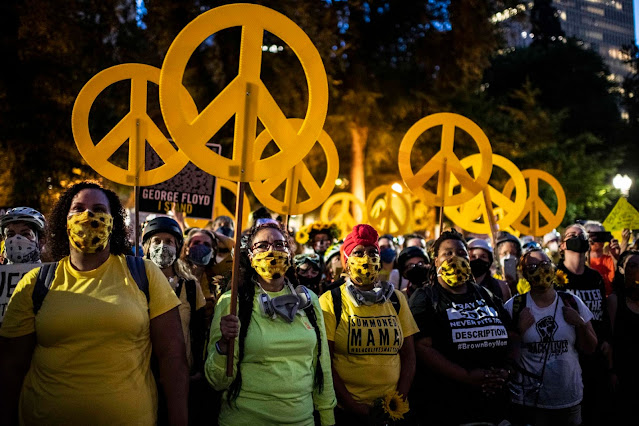 I consider myself an optimist. A skeptical, or perhaps reluctant, one but an optimist nonetheless. I want to believe that when we speak out, when we resist, it makes a difference.

Briefly, it is important to understand some basic points about Portland, Oregon, where I have lived for twenty-five years. We are a vastly majority white city. Sundown laws, redlining, and white utopian exclusionary practices have maintained a culture of violence toward Black, Indigenous, and Brown people in Oregon since before the state was established. In accordance, our police have been notoriously brutal with vulnerable populations.

[One recent example of police culture here: In 2009, James Chasse, houseless and mentally ill, was suspected of urinating in public downtown. The police, including officer Chris Humphreys, began to arrest him, beating him so badly in the process that he died of broken ribs and blunt force chest trauma in the police vehicle on the way to the hospital. Chris Humphreys was put on paid leave pending investigation. The Portland police union called for a demonstration and thousands of PPB and supporters marched with matching t-shirts in a show of solidarity against the Humphreys investigation into Chasse’s death. He eventually was cleared and three years later shot a 12-year-old girl with bean bag rounds at a public transit station during a scuffle between her and a transit officer. Humphreys left the PPB amid controversy and moved back to his home county in eastern Oregon where he was elected sheriff and ultimately became – get this – the mental health crisis liaison for law enforcement. This is just one officer’s story. There are, of course, many.]

Read more »
Posted by changeseeker at 6:18 PM No comments: