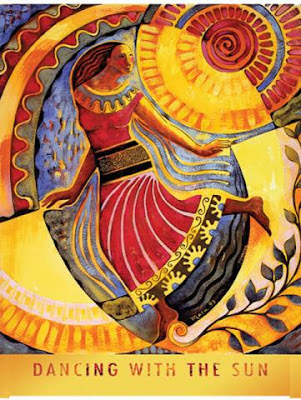 If we are very fortunate as a human being, at some point in time, we reach a level of conscious awareness of reality. I do not use this word lightly, nor perceive it as a relative matter. Just because two beings are locked in mortal battle over a disagreement in perception does not mean that their realities are, in fact, different. One may see the matter as "red" and the other as "green," but the matter is either "red," "green," or whatever color it is, regardless of how either of them perceives it and no matter which of them wins the battle. I would argue that, however skewed the current paradigm on a given topic, reality is reality. Or as the Navaho put it, what is, is.

I believe that life is more important than money and that because of this, anything that prioritizes the production of capital over the protection, honoring, and sustenance of life on this planet is not only inappropriate and ill-advised, but insane. If we continue as a human race to sacrifice Life on the altar of Money, we will ultimately commit what Johan Galtung has called "mass, deliberate, collective suicide." Therefore, I seek ways to make this clear and to live my life on a daily basis rejecting as often and in as many ways as possible those principles and practices that maintain within me the continued addiction to consumerism, while placing those who "have" in a position of more value than those who "have not." And I do, thenceforth and forever, ally myself with those who work to live, rather than seek to destroy.

I believe that men and women are not gendered at birth, but that the patriarchal power structure that has been in control for thousands of years socializes us to perceive our Selves as specifically and particularly divided in characteristically stereotypical ways in spite of the fact that there is a clearly visible and widely-ranged continuum of sexuality that manifests itself in ways both bold and delicate. The idea that men are superior to women in any way, which is then used to justify male dominance and subjugation of women, is so couched in error and violence as to be maniacal. Therefore, I seek ways to make this clear and to live my life on a daily basis rejecting this definition of myself and others. And I do, thenceforth and forever, ally myself with all people who seek to present themselves as fully valid in their own personhood.

I believe that the socially-constructed, political notion of "race" was developed in the sixteenth century for the express purpose of the exploitation of people of color by those who inhabited the continent of Europe at that time and that this exploitation continues still--brutally, unapologetically, and with the realization of great wealth. As a person bearing the physical characteristics attributed to Europeans and European-Americans, I accept the responsibility of becoming ever more cognizant of this reality, ever more sensitive to its effects, and ever more committed to changing it. I do not perceive myself as worthy of particular benefits such as are bestowed upon me, often without acknowledgement or even awareness. And I find the pervasive nature of these benefits and the rationalizing forces used to suggest that they are reasonable both egregious and ignominious. The damage that has been done to and continues to be perpetrated against people of color is so unconscionable as to be unforgiveable. Therefore, I seek to make this clear and to live my life on a daily basis most humbly rejecting this system of White Supremacy and privilege in all its forms and manifestations. And I do, thenceforth and forever, ally myself with those who struggle against this system, regardless of what they look like or who they are.

I believe that all life is sacred and that not to honor it--in all its forms--is to disrespect and dishonor not only one's Self, as well as all that came before us and will come after us, but also the very Creative Source from which we spring. I believe that there are solutions to all human dilemmas presented at this moment around the world, once it can be established that life is sacred; that it is more important than money; that men and women and children are not roles to be played, but persons to be loved and respected; and that all humans--regardless of their appearance, their cultures, their differing levels of ability, and their socio-economic status--are equally beautiful, equally vital, equally necessary, and equally deserving of all the earth has to offer. And I believe that our survival is being threatened by those belief systems that do not recognize and codify these realities. I work to change the paradigms that are responsible for those threats. And I celebrate daily those who work with me toward the day when we can know that we are all--finally--free.
__________________________________________________________
The Mara Berendt Friedman poster featured above is available from the Syracuse Cultural Workers collective.
Posted by changeseeker at 12:40 AM 24 comments:

Email ThisBlogThis!Share to TwitterShare to FacebookShare to Pinterest
Labels: consciousness

My last post was on the struggle of standing at the gates of hell where people--and most particularly young people--of all types, but most particularly young people of color are thrust by a society that does not appear to care that they are human and, in fact, seems hell bent, if you will, on seeing them founder there. Since I wrote that post, some books have come to mind that might be interesting to those who find themselves trying to be of service in such settings. They aren't many and I'll just list them here in hopes that readers will add other titles in the comment thread.

Failing Grades: How Schools Breed Frustration, Anger, and Violence, and How To Prevent It by H. Roy Kaplan

The Way it Spozed To Be by James Herndon

A Kind and Just Parent: The Children of Juvenile Court by William Ayer

These books are very different from each other and I'm making no claims for how they may or may not apply to a given situation. I have not included the (too) many books I have found inspirational or instructive that were just about poverty, the inner city, disenfranchised youth, and so forth, because the man for whom I wrote the original post on the gates of hell is already well involved in that setting and after thirteen years probably could write a book himself. But I got special and helpful input from each of the books above and look forward to seeing what you might add to the list.
Posted by changeseeker at 8:25 PM 2 comments: