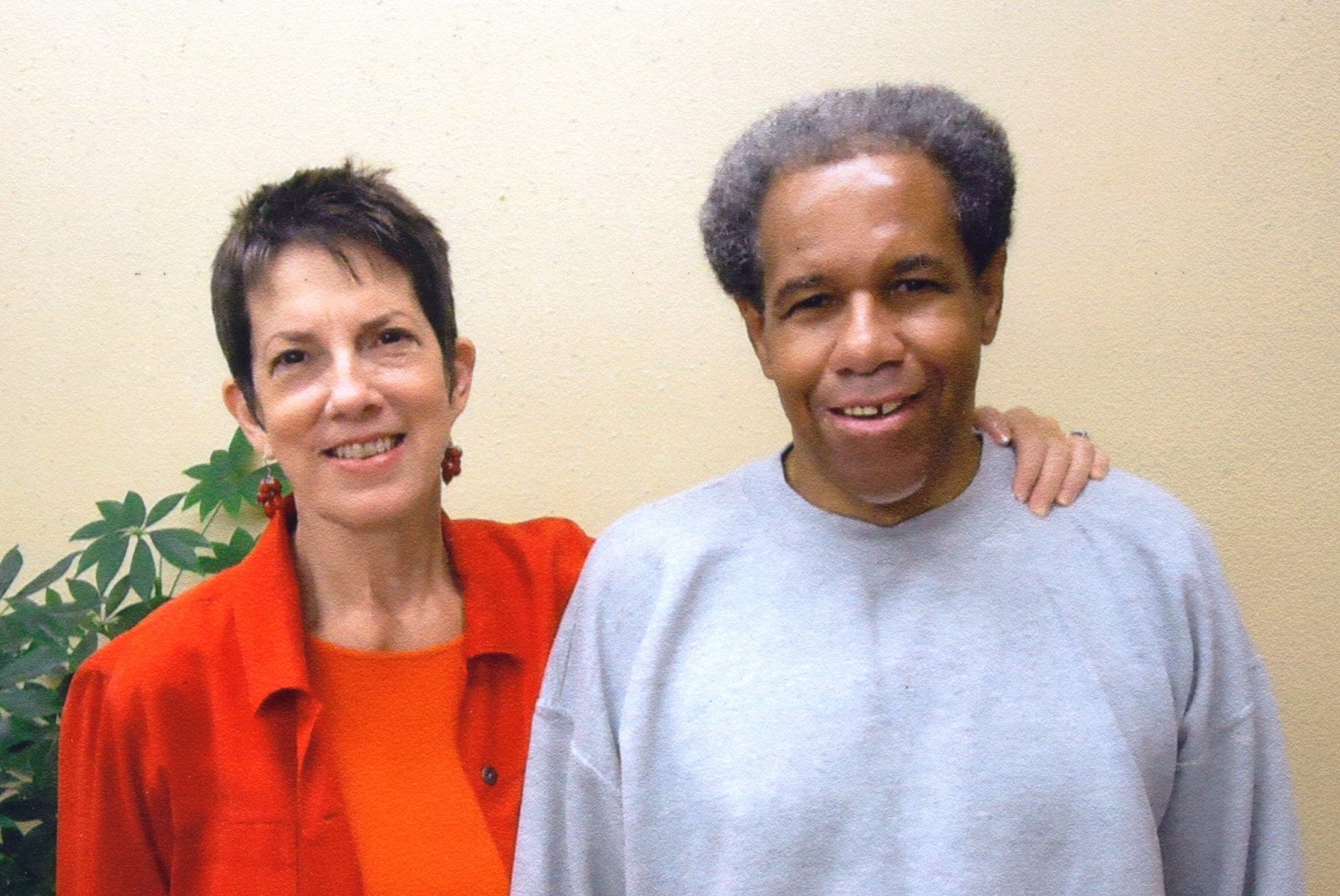 
So I load up on coffee and listen to music or audio books and, over time, I've gotten used to the trip. But I'll never get used to the visits and all the fol-de-rol they put us through just because they can.

Originally, the "rules" allowed us to have two 4-hour visits in a weekend because I live so far away. Though Albert was shackled when he left his cell, the shackles were removed when he got to the visiting room and our visits were conducted sitting at a table where we could eat vending machine food and drink sodas or water. And on holidays, I could purchase a cake at the front door for us to share. The "rules" allowed us to hug at the beginning and at the end of each visit and, on one occasion, the "rules" even allowed us to have a bunch of photos taken, one of which can be seen above.

The most interesting thing about prisons, however, is that the "rules" change all the time, especially for individuals who ostensibly deserve extra punishment for whatever reason. I'm not talking about a prisoner who breaks a rule and goes through a due process that is the same for everyone. I'm talking about a prisoner -- like Albert Woodfox -- who has been continually tormented for more than forty years because he was one of three men who organized a Black Panther Party chapter in Angola Penitentiary back in the early 1970's and has now become an international icon of resistance to oppression. Oh, yes. And let's not forget all the legal suits he's won and the legal precedents he has set during all those years.

Anyway, the "rules" keep changing for our visits. First, the visits went from four hours to three hours and then they went down to two hours each. So instead of driving ten hours to get eight hours of visiting time, I now drive ten hours to get two 2-hour visits. But it gets worse.

The "rules" now require that Albert has to wear the shackles for the entire time we're visiting (with his hands chained to his waist and his feet shackled to the floor despite the fact that there are anywhere from one to four guards in the room with him the whole time). The "rules" also mandate a glass window between us now and a heavy mesh we must speak through. We can see each other clearly through the glass, but if I want to hear halfway well, I have to give that up, lean down until my head is almost on the counter and peep through the mesh. We get no hugs and he gets no food or soda, so I don't feel like having anything either.

On top of everything else, until he took them to court and won an injunction to prevent them from doing so, the "rules" suddenly demanded that he be strip-searched and anally probed every time he left his cell for the past year or so. And the pat downs I receive at the front desk have gone from being peremptory to being foreplay.

I know I'm not the only one that goes through this. Albert has regular visits from a number of folks. But I want you to get a feeling for the ugliness of this situation and its arbitrary nature. Are you with me so far?  Because now that I've set the stage, I want you to imagine you were sitting there next to me this weekend, looking through the glass, listening through the mesh to a man who knows he may be forced to endure this treatment for the rest of his life. In particular, he chose to relate -- and I have recreated here from memory -- what he said to a psychiatrist who is helping the Department of Corrections build their case in defense of long-term solitary confinement.

"When I look back to some of the things I did as a youth learning how to survive from the Sixth Ward Highsteppers in New Orleans, I realize that society was teaching me to be an enemy of the poor, the ignorant, and even my own people. I feel bad about some of the things I did back then. And sometimes I wonder what I would have become if none of this had happened the way it did.

"But being introduced to the Black Panther Party in jail in New York City gave me an alternate option to survival. It changed the game. The Black Panthers were the first Black people I ever saw who were not afraid. Watching them, talking to them, learning from them changed my life forever. It was the first time I ever heard a voice louder than the voice of the street. And when I came back to Louisiana and went to Angola, the Black Panther Party's Ten Point Plan came with me.

"The Ten Point Plan was about self-determination, taking responsibility for your decision-making, for your life, for your community, and I began to see that I could make a difference in the world. I wanted to do that and I was on fire. I was every kind of radical and absolutely convinced that major social changes in America were right around the corner.

"When Brent Miller was murdered and they rounded up Hooks [Herman Wallace] and me and put us in the hole, it never crossed my mind that I would spend the next four decades locked up 23 hours a day in an 8' by 10' cell. It didn't even occur to me that we would be convicted. We were innocent! I was positive that the people -- our brothers and sisters outside -- would rise up and organize and keep us from being railroaded.

"Then, when they were taking us out to be arraigned, one of Brent Miller's brothers came tearing up the road in a truck, skidded to a stop near the van we were in and jumped out with a pump shotgun, screaming, 'Where are those niggers? Let me at 'em! I'm gonna kill those sons o' bitches!' Suddenly, it was serious. In that moment, the realization that our lives were at stake and the law might not protect us flooded over me.

"Now, all these years later, the hearing on the civil case related to our long-term solitary confinement is approaching. So they sent this psychiatrist to question me. What he was doing, of course, was to try to get me to say that forty years in solitary confinement hasn't really been all that bad. 'You seem quite well adjusted,' he said.

"No television or hobby craft or magazines or any of the other toys you call yourself allowing can ever lessen the nightmare of this hell you help to create and maintain.

Posted by changeseeker at 9:35 PM

Changeseeker, this is a powerful and very important piece you wrote.

Thanks for helping to spread Albert's voice, and keep fighting for justice everywhere!

Also, if anyone reading this has not yet signed onto Amnesty International's call for Albert Woodfox's immediate release, please do so: