Georgia Prisons: Locked Down for Liberty 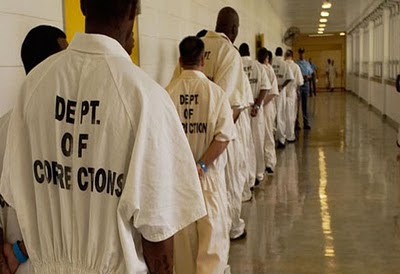 A few weeks ago, I was asked to write a short piece for a book about an underground newspaper collective I used to belong to back in the early 1970's. The paper was originally called the Penal Digest International and was touted as "the voice of the prisoner." The collective was also the base for the National Prison Center, the National Prisoners' Coalition, and the Church of the New Song, all of which get mentioned here and there on the internet still, but not very correctly and mostly pretty negatively, despite (or maybe because of) the fact that the Church of the New Song managed to win its suit against the prison system all the way to the U.S. Supreme Court.

Anyway, in the process of writing, I was caused to take a walk down memory lane and I'm having trouble finding my way back.

One reason is that, as I point out in the piece I wrote, I never really left the "prison abolition movement" even when I burned to a crisp and walked away from the PDI et al. During that time and ever since, I've written letters to the editor, newspaper columns and articles, and spoken at every opportunity on what prisons are and what they represent in a country that uses them to push a White Supremacist and reactionary political agenda as a capitalist enterprise.

A few days ago, I was informed that, on September 10th of this year, while I was busy, busy, busy and paying little if any attention to the outside world, a preeminent leader and scholar, a lovely and humble man, and a man who affected me greatly in the short, but intense time we spent in each other's company, left me -- and the rest of us -- behind to muddle through without him in the world.
Dr. Ron Walters spent 25 years as a professor and chairman of the political science department at Howard University before going to the University of Maryland, where he directed the African-American Leadership Institute. He also taught at Syracuse and Princeton Universities, was a fellow at the Institute of Politics at the Kennedy School of Government at Harvard University, a former member of the governing council of the American Political Science Association and a member of the Ralph Bunche Institute at City University of New York’s Graduate School and University Center. He played a principle role in both of Jesse Jackson's ground-breaking runs for the Presidency. He wrote a string of books and articles examining with elegant clarity such issues as how a Black Presidential campaign might be victorious (as it was while he was thankfully here to see his ideas successfully implemented). And he socially and intellectually reproduced himself for decades wherever he made an appearance to teach, to speak, to organize or to learn -- because he was always learning.

So, how did someone like me in the wilderness of Louisiana get to spend three-days straight with such a person? I was introduced to Dr. Walters on a poverty tour of the Mississippi Delta organized by Gathering of Hearts founders Antoinette Harrell and Inez Soto-Palmarin in February of 2009. It didn't really make a dent when I was told in passing he was going to be there. In all honesty, I didn't even know who he was and was only introduced when we were already in the SUV on the road.
Antoinette had engineered the five-hour trip north to make sure Dr. Walters, she and I would be riding in the same vehicle. And the more we talked, the more I realized I was in the presence of a truly great intellect, even without reading his bio first (which I most certainly would have done had I fully realized the position I was going to be in). The way it was, I wound up spending most of the next three days studiously nodding in silence, gasping with astonishment at his bold analysis and straight-forward statements, or running my mental legs off trying not to fall flat on my face in comparison -- often on live radio.
We were up late, rose early, went without breakfast, grabbed food as possible, stood interminably in the rain, and proceeded from one planned activity to another without pause or (it seemed at the time) consideration. Yet Dr. Walters, who was years older than me and was, I suspect now, already gravely ill, never complained, never flagged, never missed a cue to be attentive or reach out graciously to those we were "visiting," and never failed to amaze when the mic was live.
Not only did he rise to the occasion himself, but he inspired me to stay strong, focused and effective, as well. His public statements were so blatantly and urgently honest that they forced me to new heights of honesty and urgency myself, which as those of you who know me can attest, is really saying something. Now, knowing that he died of cancer less than two years later and knowing the kind of fighter he surely must have been, I cannot but imagine that he was already very ill, standing there in the rain, which serves to teach me yet another lesson in dignity and purpose even now.

In any case, others who knew him better than me have weighed in here and here and here (and believe me, that's not even the tiniest tip of the iceberg). The YouTube video above tells the story of how and how long ago he started his odyssey to model unflinching commitment to justice. And the YouTube video below demonstrates how elegantly and pointedly he addressed even the thorniest of questions. If after seeing this post, you want more, you may be interested in viewing a longer presentation he made at Florida Atlantic University last year.

Beyond that, I just want to say here that I am proud to have shared a moment in time, a car seat, and a microphone with this brilliant and exemplary man. I could not on my best day hope to hold up by myself the torch he has passed on, but together, you and I and all of us who believe as he did -- that it's not enough to ponder, one must face reality, tell the truth, and act to bring about change -- can do him proud.

Posted by changeseeker at 5:08 PM No comments: 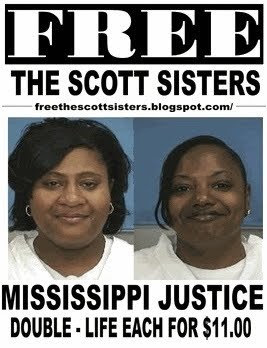 A few weeks ago, syndicated columnist Leonard Pitts Jr. of the Miami Herald raised his voice about a case that has been crying for justice from coast to coast the last couple of years. It has to do with a pair of sisters in Mississippi (yes, I know, but that doesn't make it okay) who've already "served" more than fifteen years in prison for supposedly setting up a robbery that injured no one physically and netted a whopping $11 for the five people involved (that's two dollars apiece, folks). He wrote:

"Let’s assume they did it.

"Let’s assume that two days before Christmas in 1993, a 22-year-old black woman named Jamie Scott and her pregnant, 19-year-old sister Gladys set up an armed robbery. Let’s assume these single mothers lured two men to a spot outside the tiny town of Forest, Miss., where three teenage boys, using a shotgun the sisters supplied, relieved the men of $11 and sent them on their way, unharmed.

"Assume all of the above is true, and still you must be shocked at the crude brutality of the Scott sisters’ fate. You see, the sisters, neither of whom had a criminal record before this, are still locked away in state prison, having served 16 years of their double-life sentences.

"It bears repeating. Each sister is doing double life for a robbery in which $11 was taken and nobody was hurt. Somewhere, the late Nina Simone is moaning her signature song: Mississippi Goddam.

"For the record, two of the young men who committed the robbery testified against the sisters as a condition of their plea bargain. All three reportedly received two-year sentences and were long ago released. No shotgun or forensic evidence was produced at trial. The sisters have always maintained their innocence.

"Observers are at a loss to explain their grotesquely disproportionate sentence. Early this year, the Jackson Advocate, a weekly newspaper serving the black community in the state capital, interviewed the sisters’ mother, Evelyn Rasco. She described the sentences as payback for her family’s testimony against a corrupt sheriff. According to her, that sheriff's successor vowed revenge."
Want to know more? The best rundown I've seen to date was written by Richard Prince and published on Black Agenda Report.
Posted by changeseeker at 9:01 AM 7 comments: 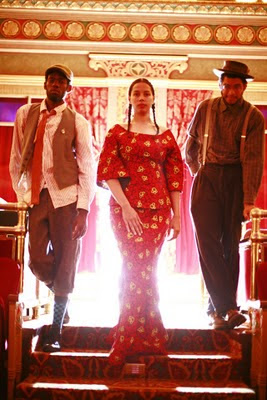 Every once in a while, in the process of everyday life, you can run across a combination so pretty, so beguiling, so talented, sophisticated and smart that all you can do is kick back and grin. The Carolina Chocolate Drops have that effect on me. Even if you don't like "country" music, you really owe it to yourself to open your mind for just long enough to watch this YouTube video. These folks make me glad mine isn't the last generation.

"Tis The Season To Be Jolly 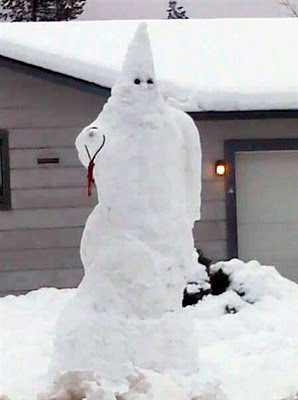 Ho! Ho! Ho! And a Meeeerry Christmas! Maybe the economy is shot to hell, but even the Aryan Brotherhood is in a festive mood this holiday season. Still, I can't help but wonder what kind of human(?) mind wakes up one snowy morning in early December and says, "I think I want to build a snowman that looks like a KKKlansman on his way to a lynching!"

AOL calls it "weird news," but Mark Elieseuson of Hayden, Idaho (near the old Aryan Nations National Headquarters -- why am I not surprised?) was quoted as saying he doesn't get why it was a problem. That was right after the police informed him that he either had to knock it down or be arrested for "creating a public nuisance," which covers things "offensive to the senses."

Flipping the switch is easy on this one. Can you imagine what the cops would have done if a Black man in Detroit put a snowman out in front of his house with a sign reading "Kill Whitey"? Uh-huh. No question about it. That's why jails have basements.

Anyway, Bubba...er...Mark knocked the snowman's head off and took the noose back into his garage, I would assume, since you can see the garage walls covered in the photo below with what I must imagine are garish white power flags. Wotta guy! I wish he was MY neighbor. Come to think of it, I live in Louisiana and he -- or somebody very like him -- probably is. Sigh.

In any case, since this guy obviously wants so desperately to be noticed, some would suggest that the best way to handle the situation is to ignore him. I think not. I think he and all the others like him should be taken very, very seriously. They mean harm to the rest of us. So it's important for them to stay clearly identified. 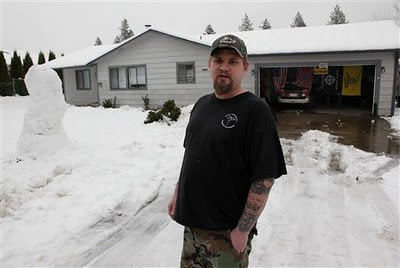 Posted by changeseeker at 7:41 AM 2 comments: