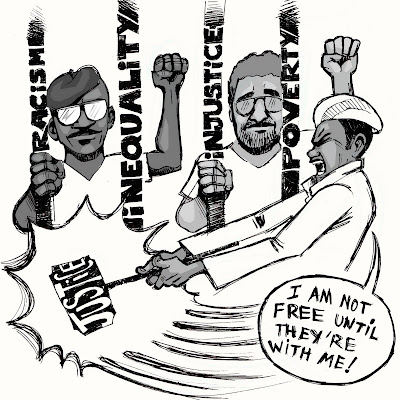 If I wasn't working impossibly hard most days of every week (even my students -- a third my age -- ask me incredulously how I do it), I'd feel guilty about not blogging for an entire month. It's not that I don't have stuff to blog about. That's endless. But I've been neck-deep in a project some students and I have been putting together and that's what this post is about.


As you know, if you're a regular reader (when I am posting more often), I have become increasingly committed to a campaign to free Albert "Shaka" Woodfox and Herman "Hooks" Wallace, the remaining two incarcerated members of the Angola 3, who have been in solitary confinement in Louisiana for more than 37 years (with a short break last year when Rep. John Conyers, Chair of the United States House of Representatives Judiciary Committee, showed up at Angola). Not only do I blog about them, I talk about them. Daily. Multiple times. Many references. In class; out of class. In front of community groups. Casually to my friends, who have long since learned to accept it. So it was hardly shocking that the student club I advise became committed to the campaign, as well.


The result will be a huge campus event this coming Thursday, when Billy X Jennings and Malik Rahim (Panthers during the 1970's) will show the new VH1 documentary on the history of the Black Panther Party and then answer questions afterward; artist Jackie Sumell will show some documentary snips related to The House That Herman Built, a project she and Herman Wallace have kicked off; and author and activist Robert King, the Angola 3 member who won his release on bogus charges in 2001 after himself spending 29 years in solitary confinement, will speak. While all that is going on, a mock cell in the Student Union breezeway will invite students to experience the size of the space the Angola 3 call their universe, an Angola 3 and Black Panther Party historical exhibit will be presented, state-of-the-art homemade jambalaya will be served and a reggae/ska band out of New Orleans called Big, Fat and Delicious will play. The students wanted to call for justice, but they also wanted to celebrate the survival of these three remarkable men. So it's gonna be a par-tay!


Since I haven't met the national campaign team as yet, this is extremely exciting to me personally and I know how much it means to Shaka and Hooks. It's also wonderful to see students who are often drowning under school and work demands take off and run with an activist action like this. I already know what I'm going to blog about next (think next week-end...maybe, depending on whether or not visiting opens back up at Angola, where one of the prisoners decided to go on vacation the other day, shutting the place down).


And in the meantime, if you and yours would like to do something in solidarity with us on Thursday, September 17th, check out the newest Angola 3 website and go from there. See you in the street!
Posted by changeseeker at 12:09 PM 2 comments: