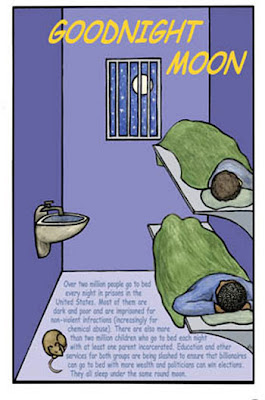 I drove up to the Louisiana State Penitentiary at Angola today to check out their craft fair, buy a few things, make some contacts, and fill up on prisoner-prepared food. Now I'm home, getting ready for the week, and thinking about the fact that, from what I've been told, 90% of the prisoners at Angola will die there. One man I spoke with told me he's already "done" forty years. If it has cost (very conservatively speaking) $18,000 per year to keep him locked up, that means we've already spent more than $700,000--on this one prisoner--to make sure we're "safe" and he's "punished." Further, if he lives as long as it looks like he might, I expect we'll spend over a million dollars on him before it's over. I fear him less than I fear George Bush and I think there are better ways to spend the $1,000,000.

So do you have a kinder response to Pistolette in this comments thread
http://profacero.wordpress.com/2007/10/21/on-slavery/
than I seem to be able to muster? I just do not have the patience to unpack my post for her which is primarily about slavery ('renting oneself out' and so on).

At Angola I think it only costs $18K per prisoner per year. More in that range than the $30K which is more what Federal prison costs.

Louisiana has one of the lowest operating costs in the country. CA state prisons are at $30K according to the latest California Prison Focus. But Angola is self-sustaining, produces all its own food, textiles, etc.

2001 stats I just saw put average cost for incarceration in LA (from a spinoff organization of Sr. Helen Prejean) at $12-13K but that is an average for all institutions. Max security & older population (e.g. Angola) is at the higher end. I've seen the $18K figure, but a few years ago (late 90's).

I wonder if that $18,000 figure (which, as you point out, PZ, might be higher now) reflects the profit made from the prisoners work. It may, but that would be something of a game.

Tax dollars go into maintaining prisons. Prisoners make money for profit-making enterprises, for which they are paid nothing or far below market value. This means the profit-making enterprises have fewer expenditures, making even higher profits than they would be able to make any other way. But the profits are NOT rolled back into the prison (to take the place of tax dollars); they go into pockets, pockets that can be deeper because of the lack of overhead. So the workers feed, clothe, etc., themselves AND make substantial profits for capitalist enterprises, all while making it look good on the state books that "only" $18,000 per year is being spent on each prisoner (assuming the whole $18,000 goes into taking care of the prisoner, which it probably doesn't, at least not under these circumstances). Clever.

And I'm sure I'm leaving out some crucial steps that would make the process look even more like a shell game...

you're right. it makes no sense at all.

the warehousing of black bodies. continues.

Welcome, prisoner's wife. I've been heartsick over this process since 1970. And it's far worse now than it was then.