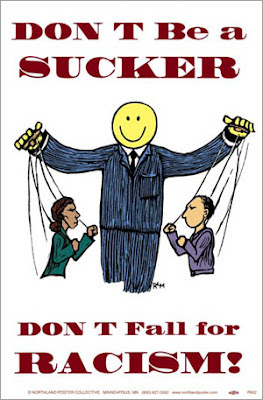 Over the past nine days, I've done ten presentations about the socially-constructed, political notion of race in the United States beginning with one entitled "What is Racism and How Do I Know If I Have It?" that I gave before 85 people in the Student Union on the 17th. Yesterday, a young European-American man came to me after class and said flatly, "You've just convinced me that I've been right all along."

"That there's definitely going to be a Civil War in this country over race," he responded.

"But we could change that if we want to," I countered.

I searched his face, looking for something, anything, I could pin hope to.

But he was already gone, his back passing through the door of my classroom on his way to tomorrow.

Posted by changeseeker at 11:45 AM

Email ThisBlogThis!Share to TwitterShare to FacebookShare to Pinterest
Labels: racism

Not all of your students have walked out the door and back into ignorance. ..but I'm sure I don't have to tell you that.

Your passion is inspirational, I only hope that my passion will carry me as far and as long.

It will, Marc. You were already thinking when you got to me. Still, thanks for the kind words. Oh, yeah, and good luck in law school. Keep me posted, okay? I may need you someday. ;^)