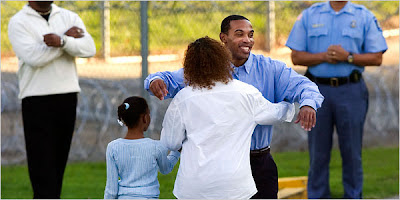 Genarlow Wilson, who has served two years in prison for receiving oral sex from a 15-year-old girl when he was 17 was released today after the Georgia State Supreme Court ruled that the ten-year sentence he was given for committing this heinous crime was cruel and unusual. The Court noted that the Georgia legislature has reduced this crime to misdemeanor status since Wilson's sentencing, but even so, the vote to overturn the sentence was 4 to 3. That means (lest we forget for even a minute) that Genarlow Wilson came within one vote of sleeping in a cell tonight, even though a poll of nearly 13,000 Atlanta Constitution readers found that 95.5% of them agreed that Wilson should be freed.


Congratulations, Genarlow. One down, God only knows how many to go.
Posted by changeseeker at 10:30 PM

I'm sure you've heard that Florida has now started a juvenile sex offender registry...one more way to make sure children become the "boogie men" the system needs them to be...

No, marc, I hadn't heard about that. Do you know if a Genarlow Wilson type of case would make the youth a "sex offender"? That would be scary.