Be Bold, Be Brave, Be Red October 31st 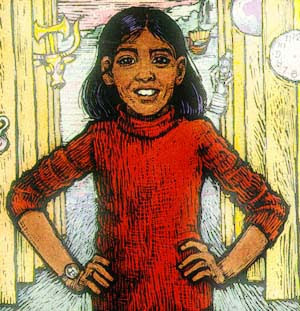 A few weeks ago, I got involved with something that deserves waaaaaay more attention than I have been able to give it. It's a campaign to bring attention to the fact that in a society full of madness, where violence has become a language of its own, women of color as a group, as the most vulnerable among us, have become scapegoats for every kind of frustration.

Women and girls in general are attacked so routinely in the United States as to make it a national tragedy, but women of color are a disproportionate and disproportionately unprotected body within that reality.
Similarly, people of color in general are regularly insulted, offended, and attacked by people that look like me, ridiculously often without any kind of repercussions or recourse for the victims. In fact, if the person of color takes issue with the treatment, they are said to be "over-reacting." And within this group, sometimes even at the hands of men of color who may be themselves reacting out of their own frustration, Black and Brown women, in particular, appear far too often to have no hiding place.
A movement to address this terrible whorl of injustice has begun and is marking its first action by calling for women of color and their allies to wear red on October 31st. I was so moved by the language in some of the material I have received on this, that I am featuring it verbatim here. An entire group of women has set this in motion, but I received this from Fallon:
"Recent events in the United States have moved us to action. Violence against women is sadly, not a new phenomenon in our country or in the world, however, in the last year, women of color have experienced brutal forms of violence, torture, rape and injustice which have gone unnoticed, received little to no media coverage, or a limited community response. We are responding to:
*The brutal and inhumane rape, torture, and kidnapping of Megan Williams in Logan, West Virginia, who was held by six assailants for a month.
*Rape survivors in the Dunbar Housing Projects in West Palm Beach, Florida, one of whom was forced to perform sexual acts on her own child.
*A 13-year-old native American girl who was beaten by two white women and has since been harassed by several men yelling "white power" outside of her home.
*Seven black lesbian girls who attempted to stop an attacker and were later charged with aggravated assault and are facing up to 11-year prison sentences.
"In A Litany of Survival, Audre Lorde writes, 'When we are silent, we are still afraid. So it is better to speak, remembering we were never meant to survive.' These words shape our collective organizing to break the silence surrounding women of color's stories of violence. We are asking for community groups, grass-root organizations, college campus students and groups, communities of faith, online communities, and individuals to join us in speaking out against violence against women of color. If we speak, we cannot be invisible.
"On September 20th, I wore black. I wore black, as many Black people did, in solidarity with the Jena 6, who are quickly becoming the 21st century’s Scottsboro Boys. I am wearing black, even though I have the profound urge and desire to wear red, a Maoist, seductive, bold red – on this, the possible new dawn, of what Al Sharpton has begun calling the 'Civil Rights Movement of the 21st Century.' I am wearing black, even as I have conflicting thoughts and emotions. I am eager for this moment of solidarity - a chance to acknowledge the injustice of inequitable sentencing. So, for today, it is my lipstick that is crimson.

"But on Wednesday, October 31, 2007, I will be wearing red; that uncomfortably womanish shade of scarlet that suggests a certain looseness, appreciation of blues, likelihood to walk the streets at night, willingness to be loud, dedication to self, and a deep refusal to be rendered invisible. Red, the color so many of us are told to avoid because of its Western association with the marked, fallen woman; red, that rich, rapturous, full, so-bright-it-looks-as-if-it’s-had-a-good-meal ruby color, red so intense, it’s nearly purple. Yes, that color – that’s the one I want to mark my outrage at the rape and torture of Megan Williams, a 20-year-old woman in West Virginia; the sexual assault of a Haitian woman and her son in West Palm Beach, Florida; and the continued violence visited upon women of color.

"For me, the color red is about boldness. It is a vibrant color that cannot be ignored. Beyond the pink of feminism, and even the purple of womanism, red is a color that says, “stop and see.” On October 31st, we ask women of color and their allies, to break the silence and invisibility surrounding violence against women of color, by choosing to be seen. By choosing to be vocal, to be brave, to be bold and work to stop violence against women.

be bold / be brave / be red / stop the violence
"We are asking organizations and individuals to host rallies and speak outs on Wednesday, October 31, 2007 at various monumental sites (i.e. The Lincoln Memorial, Seattle’s Arch, Chicago’s Bean, Atlanta’s MLK memorial, etc.) located in their cities or to host rallies and speak outs at locations that represent the political, economic, and/or social power of their cities such as the local court house, the local chamber of commerce, the local police department, and the local city council. Groups can also consider rallying in sites where specific violence against women of color occurred.

If you want to get on the band wagon (and of course, you do), you may contact the organizers here.
Posted by changeseeker at 12:00 AM

Now that interracial dating and marraige is not uncommon, more and more spousal abuse cases involve interracial couples. It appears that the Megan Williams case is turning out to be a case of domestic violence rather than a hate crime.

Bobby R. Brewster, one of six arrested in the case, had a relationship with the victin, He was charged in July with domestic battery and assault after a dispute between them. It appears that this is the motivation for the subsequent attack on Williams. All too often, husbands and boyfriends arrested for battering their spouses or girl friends often retaliate with the victims call the police.

There are other, more horrific, cases of interracial violence you should add to your list.

Last January, two Knoxville Tennessee, college students, Channon Christian 21, set and her boyfriend Chris Newsom 23 were carjacked by two black males. They forced Christian and Newsom to accompany them back to their home, where they then enlisted the help of two others, including a black female. They sodomize Chris Newsom in front of Channon before they castrated him and shot him in the head. They wrapped his body in bedding and set it afire, then discarded the bodyt along some railroad tracks,

The three males, with the assistance of the female, subjectws Channon to a brutal and continuous series of rapes, including sodomy, over a period of two days, The men urinated on her, and poured cleaning chemicals into her mouth and down her throat in an effort to destroy the physical evidence they had left behind. They then cut off her breasts, dismembered her body and threw it in a trash can at the residence.

On September 21, 2007, to cite another case, a 12-year old white girl named Emily Haddock was home sick from school. Four black males broke into her home and shot her in the head numerous times. Her body was found later that same day by her grandfather. Initially the police described the murder scene as “brutal,” but didn’t elaborate. Almost immediately a shroud enveloped the case and any further details have been carefully suppressed.

What a damn shame. I'll be wearing red with everyone else. Good blog, and I'll def. be back.

Anonymous: I think you missed the point of the action and this particular post. I mentioned attacks on women in general and attacks by African-American men on African-American women, as well. The problem is that when a European-American woman is the victim, the act is usually met with outrage and a strong media response, while attacks against women of color often engender neither. This is why the action has been called for and why I am supporting it.

And as far as bi-racial relationships are concerned, I hope you're not suggesting that the race-driven torture Megan endured for a month at the hands of six obviously and long-term sick people was somehow her own fault or what she gets for crossing the color line. That would really mark you as a hyper-racist yourself, which I doubt that you'd want to do.

Bi-racial relationships, by the way, are not, as yet, all that common anyway. And they are hardly likely, as a rule, to result in what happened to Megan. Besides White men were jumping their women (of all hues) looooong before Black men got the fever. We're not talking about domestic violence as a singular type of violence here, in any case. We're talking about violence in general against women of color that is too typically discounted as somehow less important because of their race or ethnicity. Anyone can comment on this blog, of course, but it's important for all commentators to stay on topic. Thanks.

Jose: Greetings and thanks for dropping by. You're welcome any time. Please put out the word about the 31st.

i posted at the sirens chronicles and life's journey.

The Electronic Village supports the October 31st protest and agrees with efforts to Stop the Violence in our community.

Thanks, Betmo and Villager. Blessings.

I am glad that I came across this post, even though it was two weeks too late. I had not even heard that this was happening until I just happened to check for updates on SCESA's(sisters of color ending sexual assault) webpage. I worked at a coalition that dealt with sexual violence against women and I can tell you that it opened my eyes. We need to continue to speak out on what's going on in our communities of color. They say history repeats itself and I think it's happening right before our eyes.