It's Predictable And I Told You So! 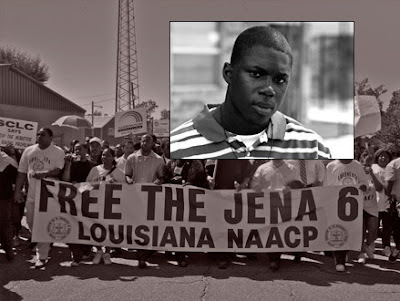 A lot of folks -- even folks who marched in Jena, Louisiana, on September 20th -- probably winced when Mychal Bell was unceremoniously re-arrested when he showed up for a "routine" hearing in court last Tuesday.


"Oh, dear," you could almost hear many of his supporters mumble. "That's really a shame."


But there was little outrage in the response.


See, for more than a few, this new arrest put a different spin on Mychal's railroading and the infamous schoolyard brawl.


"Gosh," they seemed to sigh. "He's been in trouble before. Maybe..." and their voices trail off.


I was busy myself and didn't have time to check into the situation at that moment, but I know better than to assume the new arrest meant much except that the Prosecutor (remember him?) and the Judge (remember him?) were really pissed off when Rev. Al Sharpton et al met with the Governor and got Mychal released a couple of weeks ago. Still, I felt a little forlorn and wondered how I would approach what needed to be written about this. Until Friday, that is.


On Friday, eight guards and a nurse were acquitted in Panama City, Florida, of manslaughter or any other charges in the death of Martin Lee Anderson, a fourteen-year-old African-American kid with no previous criminal record who had been sent to a juvenile "boot camp" after his conviction for the heinous crime of "stealing" his grandmother's car and going on school property while he was suspended. On the day he arrived at the "camp," Anderson was forced to run laps until he collapsed. Then, the eight guards were filmed punching him, kicking him, dragging him around the yard, covering his mouth with their hands and forcing him to inhale ammonia capsules up his nose until he suffocated. During the trial, they testified that these were all approved procedures used to deal with youth who "feigned" illness. And the whole process was perpetrated under the watchful eye of a nurse, who apparently got her training at Dachau. 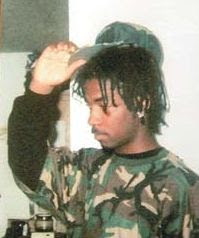 The all-White jury in the home town of the guards only needed ninety minutes to determine that no crime at all had been committed by these grown men who from where I sit killed a fourteen-year-old boy without a backward look. The physician who originally ruled that Anderson died because of a latent Sickle Cell trait (in spite of the film) and whose determination was ultimately over-ridden by that of a real doctor, went out to celebrate with the guards after the verdict was read.


Special Investigator Mark Ober from Tampa was quoted as saying that he was "disappointed," but that, because the "boot camp" was subsequently closed and "reforms" were implemented in the juvenile justice system, "Martin Lee Anderson did not die in vain." I would suggest to Mr. Ober that Martin did not die in vain; he died in FACT. And therein, as I am wont to say, lies the rub.


Mychal Bell's previous convictions covered four charges. The first two were simple battery ("non-concensual, insulting or harmful contact, regardless of harm done," most often prosecuted as a misdemeanor). I've seen simple battery charges result from as little as a push or tripping another kid as a joke. The other two charges had to do with destruction of property, which I've seen result from as little as kicking a door on the way out of a classroom or breaking a pencil that belongs to someone else. I'm not saying that Bell's charges were that minor, but they could have been and it would have read the same way. And as far as his "violation of probation" is concerned, my guess is that it's not difficult for an African-American boy in Jena, Louisiana, to wind up on probation for doing little more than having skin. And once they're on probation, it's a short trip to the big house, as Mychal Bell has already seen -- twice.


Coming from the man who wrote a commentary for the New York Times claiming that only Jesus kept the rabid Black people from tearing Jena apart, Prosecutor Reed Walters' claim that this newest legal assault on Bell, resulting in a sentence of eighteen months in addition to the nine he's already done for no reason, is "unrelated" to the earlier issue is ludicrous.


So what we have here is two cases. In one, eight trained professionals caused a fourteen-year-old boy to suffocate and they didn't even get a spanking. While in the other, a seventeen-year-old boy whose life has been threatened by everybody from the Prosecutor on down over the past year and who was -- according to the courts -- unjustly incarcerated for nine months in an adult jail already this year is doing eighteen more months for simple battery and destruction of something as yet unnamed. In the first case, the boy who died was Black. In the second case, the boy who was convicted was Black.

Yeah. I blogged about the Martin Lee Anderson case also. Where's the Outrage? What would have happened to the eight if they'd been tried for suffocating a canine?

cero, maddening has become the norm.

ACT: "What would have happened to the eight if they'd been tried for suffocating a canine?" Indeed. All eight of them ganged up on one little puppy, kicking it and punching it and dragging it around and torturing it...on film yet.

yes the white folk do indeed get their revenge. Mike Vick -for Imus etc. Passive aggression what can we ever expect from these people and their institutions???

I've been thinking about your comment, Anonymous, ever since I first read it earlier this morning. I understand where you're coming from and I do think White folks use passive-aggression regularly against people of color and each other for a wide range of reasons (and probably vice versa, as well). Further, I do agree, of course, that White people take "revenge," as you put it, on African-Americans that dare to challenge White Supremacy. But, from what I can tell, I wouldn't call what Michael Vick did challenging White Supremacy. He just got greedy--and maybe stupid--and jumped off into a business venture that was very ill thought out. Therefore, I wouldn't see the White institutional and public reaction to Vick's "side-job" as "revenge" for Imus or anything else. In fact, my bead on the Imus debacle is that an irritated White power structure made an example out of him because he drew fire.

The White established and maintained social institutions in the U.S. can pretty much count on business as usual (institutionally embedded racism without apology) as long as somebody like Imus doesn't come along and shine a light on it. So they gave him a thump to send a message to any other high-profile White person who might forget for a minute not to make it so obvious how things really are in this society.

If Imus and Vick had anything in common, it might be that they both thought for a minute that they were above a spanking and they were both wrong. But Imus is a racist and Vick just lost his perspective.

You see, I grew up in a Black-American neighborhood, and I had friends who died of sickle cell, and still have friends who have the trait. I know that one does not die of sickle cell trait, but may have a chance of having children with the full blown disease if his/her mate has the trait, too.

To make it totally bizarre and shameful, some say it was "disappointing" and nothing has been done. At work, I asked many questions to my white friends about sickle cell. Most beleived the reports. All believed that sickle cell is a Black disease. When I tell them that people of the Mediterranean suffer a form of sickle cell, they wrote it off as silly, until I brought in some correspondence about it.

This subject still bothers me, and is proof to me that many of my people are not willing to get their act together and change.

You're systematically wading your way through this blog, aren't you, Porfiris? :^) This really makes my day, as you can imagine. And, yes, you're right that many "White" people want to pretend to be asleep so things can stay the way they are. But that's not possible, regardless of whether their heads stay in the sand or not. Social change is inevitable and constant. We can decide to have input on its direction or we can just be drug through our own lives by the foot -- it's our choice, but stopping change is not an option.