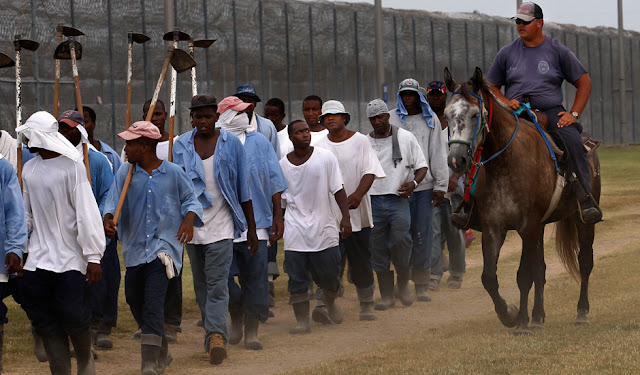 This article was written by CJ LeBlanc and published at Hard Crackers on April 13, 2020.

The United States, with 4.4% of the world’s population, incarcerates no less than 22% of the world’s prisoners, far more per capita than any other country. It’s been widely acknowledged that this has a lot to do with the “War on Drugs” initiated by Richard Nixon in 1971 (a man, we should remember, who was himself a criminal, but never served a day behind bars). Indeed, when the “War on Drugs” was launched, the prison and jail population in the U.S. stood at 171 per 100,000. Today, it’s 655 per 100,000 nationally. And in Louisiana, it’s an astonishing 1,052 per 100,000.

Some might suggest that Louisiana’s high incarceration rate is driven by the state’s poor record in the areas of education, economy, and quality of life in general. After all, nobody’s born a criminal. But whatever the root causes, the sudden descending of COVID-19 into the prison population has presented the state with a dilemma so crucial it is likely to find itself shortly under very intense federal scrutiny.

Prisoners’ rights advocates and organizations concerned with criminal justice are weighing in assertively to push for strict adherence to protections guaranteed by the U.S. Constitution and the American Disabilities Act. Even the Louisiana Department of Health has issued a detailed memo to the Louisiana Department of Public Safety and Corrections outlining its very clear recommendations. And the DPSC is responding that they are doing everything in their power to live up to the exigencies of the situation.

Reports from incarcerated citizens inside the Louisiana State Penitentiary at Angola, however, beg to differ. The following quotes are from letters, emails, and phone calls to people on the outside of the walls from various prisoners inside Angola.

Friday, April 3rd: “Yellow lines are painted on the walk indicating we get six feet of space when actually a whole unit was piled on the walk and in the kitchen over 100 men and in each dorm 85 at least. The strain got 2 of 4 urinals out and 1 of 6 face bowls out. Our families and friends are mounting an electronic protest about the six feet of space everyone is calling for and how we can’t get it.”

“We are told by the workers that go out daily that they are bringing sick inmates from all over and housing them in Camp-J, a condemned building, so it appears Angola is being made into an extermination Kamp.”

Sunday, April 5th: “As I sit here, I am at peace but ever vigilant. I have been provided a mask and a diet of almost useless information. The one thing I have is a mind and willingness to press the front line. Always has been another battle to fight. So what is the atmosphere here? Some are afraid, others confused, others are adapting and some in denial. Even the usual aggressive administration is less aggressive, afraid of dealing with this virus and the unknown certainty of what may transpire.

“No one is being tested yet. The only measure that a usually reactionary staff has taken is to check temperatures two times a day. What about asymtomatic people who will show no signs? This is prison and closed in – a situation the World Health Organization warned about. It will breed in here. But now it’s a matter of survival – a matter of whose immune system will fight it off while panic, worry, and stress are all aides of death.”

“It could be worse. We could be locked in the dorms, security pulled, snipers placed outside the perimeter, and our deaths blamed on COVID-19. Block the cellphone towers, cut the landlines, disconnect the JPay kiosk, and lights out.

“We are somewhat okay. Uncomfortable and concerned about our loved ones and friends. I look forward to surviving. It’s not check-out time yet.

Monday, April 6th: “A second prisoner has died over on the East Yard we are told. So, West Yard prisoners are now to have absolutely no contact with East Yard. They are importing sick prisoners from all over the state and turning the Gym into something to deal with the expected medical problems here. The guys that work on the medical wards are scared of what they have been witnessing. We cannot get in the Law library, but shoe-shine inmates still move around as they wish, shining the shoes of guards. Then at the end of the day, they sleep in the same packed dorms we do. The West yard Interfaith Chapel has been turned into a nurse’s station. Heard today the guards are going to have to start wearing masks to protect the inmates. But a lot of them don’t seem to be taking it very seriously. And this has not peaked in here yet.”

Wednesday, April 8th: “It appears that inexperience, incompetence, and outright stupidity is being used as the cover for an extermination plan. If the trajectory of this bio-weapon is the same as Italy and other places, Angola will explode with it. All the necessary things are being done to have this place be a killin’ field.

“It has been reported that the first inmate that got sick tested positive and was sent to the dumping ground, Camp-J, but that a mistake was made in the testing and he is now not positive and has been returned to where he started from, even though he’s definitely been exposed.

“Another inmate that got sick was moved by fully suited up guards to Camp-J. Many of the guards are scared. One of them said to my friend that seventeen hundred body bags have been placed at one of the warehouses in Angola. We shall see how this plays itself out.”

“In my view, the powers-that-be have no intentions of releasing anybody, but would rather use this virus to reduce the population to the size they desire. Check out the phone footage from Alabama that was on the News, and from other prisons all over the land. Michelle Alexander said in her book The New Jim Crow that a human rights nightmare is occurring on our watch, talking about mass incarceration. I would say, the world is about to witness a human rights nightmare she never conceived of at that time, but that prisoners have been speaking of for many years.”

Friday, April 10th: “There have been some positive changes, I guess. They’re opening the windows, but only in the dungeons, and they aren’t gassing people with chemical agents as much as they usually do. They’re still jumping on people, though.”

“Nobody wants to go to the field anymore because of the virus and the vegetables were rotting out there. So they beat this one guy who didn’t want to go and they’ve been forcing guys at one of the outcamps to pick ever since.”

“Guards get 5% hazard pay for going into E-block, where inmates go when they’ve been exposed or when they first get sick. The prisoners are not tested. They’re just put in E-block. So some people in there have it and some don’t, but they’re all in there together. And besides that, E-block was condemned years ago, but they’re using it now and not telling anybody it even exists. I heard it’s maxed out with maybe 60 men.”

“The medical professionals going into E-block are completely masked up all over and there’s a sign that tells people not to go in there if they’re not authorized, but they got orderlies going in and out all the time – to pass food, clean up, get inmates out of their cells – and they aren’t wearing any protective gear at all.”

“Once an inmate tests positive or has the symptoms real bad, they’re moved to Camp-J – which was also condemned several years ago – and after that nobody sees them anymore. There’s room for hundreds in Camp-J. There’s at least 90 men in there now and might be as many as 150. They’re bringing them from all over the state. But who knows?”

The prisoners at Angola – as always – continue to fill out Administrative Remedy Procedures (grievance forms) related to conditions and treatment. They try to keep up with the cases they already have in Court, though it’s hard to do when Court documents often involve deadlines and the institution’s mail room is struggling like every other part of the prison. They reach out to their families and friends in the constant knowledge that any moment they or those they love could contract a condition that has already caused more than 20,000 deaths in the U.S. in less than three months. And every day above ground is a good day.

But they feel as though those legally charged with their protection in this terrible time are not acting in their best interests. State after state and nation after nation have released or are in the process of engineering the releases of hundreds and even thousands of incarcerated men and women who might well die if left in overcrowded, already infected, institutions. Yet Louisiana – with its practice of mass incarceration at a rate unmatched anywhere else in the world – seems unwilling to follow suit.

“You gotta get the word out about what’s really going on in here,” wrote one prisoner to a supporter. “This is a war – and we’re in it.”
Posted by changeseeker at 8:36 AM