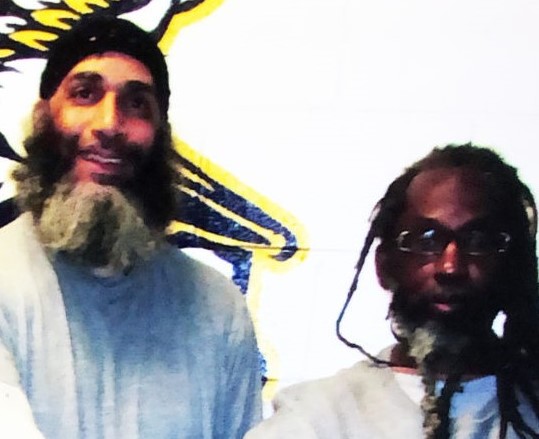 The evil trick perpetrated and perpetuated by white supremacist forces historically has been to instill a feeling of inferiority in people of other races by denigrating their physical traits while exalting whiteness. This process and practice continue to permeate and corrupt the social systems of the United States and, in truth, the entire globe.

The crusade to suppress Rastafari religious exercise stems from the fact that the root of this religion sprang from rich and potent Black soil that spiritually nurtures all nations. ONE LOVE.

The Louisiana State Penitentiary at Angola is named after the African country from which many Black people were kidnapped then brought to Louisiana and enslaved. Operations at the prison are controlled by Secretary James LeBlanc of the Louisiana Department of Public Safety and Corrections, Angola Head Warden Darrel Vannoy and Jim Rentz, supervisor of the Chaplaincy Department at the institution.

Under their leadership, Rastafarian prisoners are denied equal access to space for storing religious material and equipment. They are also discriminated against in ways that prohibit space and time for Rastafarian study groups and other rehabilitative programming and denied access to community outreach support systems.

Rastafarian adherents are required to grow their dreadlocks, which is actually a part of the initiating vow of becoming a Nazirite Rasta. Angola’s policies therefore violate the First Amendment’s Establishment Clause against excessive government entanglement with religion.

I am an elder of the Rastafari faith. From 1989 to 1995, I was held in solitary confinement for refusing to cut my dreadlocks for religious reasons.

They also violate the Religious Land Use and Institutionalized Persons Act (RLUIPA), imposing a substantial burden on Rastafarian prisoners by forcing them to engage in conduct that seriously violates their religious tenets. “Then the Lord spoke to Moses saying, ‘When either Man or Woman consecrates an offering to take the Vow of the Nazirite to separate themselves to the Lord … they shall let the locks of the hair of their heads grow.’” (Numbers 6:2, 5)

I am an elder of the Rastafari faith and have experienced similar forms of religious persecution under the Pennsylvania Department of Corrections. I have been incarcerated since July 1988. From 1989 to 1995, I was held in solitary confinement for refusing to cut my dreadlocks for religious reasons.

I was locked in a cell for 23 hours a day and allowed only one hour of exercise five days per week. The cell lights stayed on 24 hours a day. I was denied access to radio, television, phone calls, thermal underwear during winter and the opportunity to purchase food from the commissary. All this and more because I tried to exercise my rights to freedom of religion as guaranteed by the United States and Pennsylvania Constitutions.

In June 1995, I was released from solitary confinement and placed in general population. This was accomplished through a lawsuit and negotiated settlement agreement pursuant to the Religious Freedom Restoration Act of 1993 (RFRA). I was alerted to the existence of the RFRA by political prisoner Mumia Abu Jamal, who was housed on Death Row in Pennsylvania at that time. We were placed next to each other in cages during our recreation period. He had his supporters mail me a copy of the RFRA and I will be eternally grateful to them and to him for their mutual aid and solidarity.

The aftermath of my lawsuit also created religious exemptions not only for Rastafarians, but also for Native Americans, Sufis, Sikhs and other religious groups with long hair requirements for their adherents under the 14th Amendment’s Equal Protection Clause. (The RFRA no longer applies to state prisoners, but RLUIPA does.)

And the Louisiana State Constitution states under Freedom of Religion, section 8: “No law shall be enacted respecting an establishment of religion or prohibiting the free exercise thereof.”

We are in the process of building the Rastafari Legal Defense and Education Fund to defend our religious rights. We welcome any assistance and insight from our friends and supporters. We also extend our deepest gratitude to the American Civil Liberties Union and the National Lawyers Guild, as well as numerous university law professors and their students and legal aid societies that have helped us thus far. Despite being persecuted for our religion, we will unwaveringly continue to practice love with respect, as we remain confident in the victory of good over evil.

In the words of Rastafari Haile Selassie-I, “Since nobody can interfere in the realm of GOD, we should tolerate and live side by side with those of other faiths.”

We thank Rebecca Hensley and the Louisiana Network for Criminal Justice Transformation for making us aware of the struggle of the Rastafarian brothers inside Angola. To learn more or support their work, email LA-NCJT@ProtonMail.com.

NOTE: Robert T. Smith bka Kush-I is an elder of the Rastafari Living Temple, he is founder of the Rastafari Legal Defense & Education Fund and Co-founder of Global Individual Rights Defenders (GIRD).  Kush-I has been incarcerated since July 1988 and he is still fighting to regain his freedom from a life sentence.  Ex-Police officer Jack Baird confessed to the F.B.I. that he falsified evidence and lied to the Jury at Kush-I's trial.  Baird received a 15 year sentence and hundreds of prisoners were freed on cases that Baird had worked on.  Baird's confession and other due-process violations are evidence that Kush-I did not receive a fair trial.