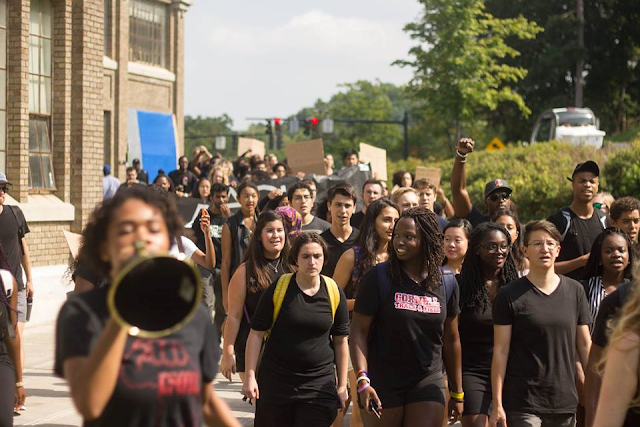 One of the organizers of Cornell BSU's Black Lives Matter rally on 9/23/16
(Credit: Julia Cole Photography)
This post is an amended version of remarks read at a rally organized by Cornell University’s Black Students United (BSU) on September 23, 2016. Students gathered to protest the recent police shootings of Tyree King, Terence Crutcher, and Keith Lamont Scott. It appeared originally on the blog for the African American Intellectual History Society and it is being re-posted here by permission of the author.

I’m delighted that you are mobilizing. Your demonstration reflects your recognition that the escalating crisis of racial terrorism requires a firm and uncompromising response.

Your protest in the face of daily atrocities is a sign of your humanity and your determination to live in peace, freedom, and dignity.

But as we demonstrate, we must take pains to avoid certain tactical and programmatic errors that often plague progressive protest in a neoliberal age.

Neoliberalism is a vicious but cunning form of capitalism.

And like all varieties of capitalism, it rests on a foundation of white supremacy. Neoliberalism’s goals are not merely privatization and the decimation of unions and the social safety net. It also seeks to manage the social order and ensure the continued political dominance of the ruling class by absorbing social threats.

Sisters and brothers, your opposition to racist state terror is a major threat to the normal functioning (and thus the hegemony) of the neoliberal regime. To neutralize this threat and destabilize the most rebellious segments of the population, the corporate power structure aggressively propagates certain false assumptions among the public.

Fallacy Number One: Dialogue and Awareness
The managers of the status quo hate resistance. So they try to guide any dissent that arises into “safe” channels. You will notice a proliferation of forums, discussions, and meetings organized by system administrators and devoted to “dialogue” and “awareness.” The premise of such efforts is that the problem of racial unrest stems from misunderstandings among rational and well-meaning parties. Thus communication and moral persuasion—rather than pressure politics—is the answer.

Fallacy Number Two: The Appeal to Authority
In our technocratic society, we are conditioned to believe that experts and officeholders hold the answers to social problems. Supposedly these professionals are able to mediate between contending groups and interests. We are taught to endlessly petition established authorities for relief, never realizing that such gatekeepers are themselves instruments of the status quo.

Fallacy Number Three: The Myth of the Disembodied Voice
Part of capitalism’s response to grassroots opposition is to assure the distressed that their “voice” is heard. That the authorities who “hear” you also enable your brutalization is immaterial. The point is to convince you of your continued stake in the system. It is to guide you toward the politics of representation and away from the politics of resistance.

Of course, there are other fallacies employed by the oppressor to confuse the oppressed. The fallacy of inclusion v. transformation, for example. Or the fallacy of “diversity” v. genuine antiracism. We are taught to be patriotic, to be patient, to strive to embody the very values of peace and goodwill that this society defiles.

These and other myths only perpetuate the system. They leave intact our society’s basic power relations. And they cause us to police ourselves and to seek interpersonal reconciliation rather than confront structural racism and oppression.

Truth is, we don’t need “diversity” training. We don’t need focus groups. We don’t need consultants and experts. We don’t need the apparatus of our oppression—racial capitalism itself—to rationalize and regulate our dissent. The logic and techniques of the corporate world won’t end the slaughter of black people, or the dispossession and degradation of indigenous people, or the transformation of the entire Global South into a charred landscape of corpses and refugees.

We need an uncompromising, multiracial, grassroots movement against white supremacy, endless war, and vicious corporate capitalism. We need to build solidarity with the resistance in Charlotte, Standing Rock, and Puerto Rico. We need to join the rebellions of workers and the colonized all over the world.

This is a human rights struggle. And it will be waged in the streets, not in boardrooms, the halls of Congress, or other strongholds of global capital.
______________________________________________________
NOTE: Russell Rickford is an associate professor of history at Cornell University. He is the author of We Are an African People: Independent Education, Black Power, and the Radical Imagination. A specialist on the Black Radical Tradition, he teaches about social movements, black transnationalism, and African-American political culture after World War Two. Follow him on Twitter @RickfordRussell.
Posted by changeseeker at 4:14 PM

A couple of the more really really difficult things for me to comprehend (and I still often fail to grasp) is (1) the astonishing manner in which resistance to one sort of oppression is morphed into creating/supporting oppression of another sort and (2) how often the pressure for change is shunted into, and usually evaporates, some sort of weird "need for dialogue" type of inaction. (I'm reminded of the "I feel your pain" phrase often uttered by Bill Clinton)

It wasn't long ago that I realized that many of us white people (not just white people...but mostly white people) tend to be able to "talk the talk" but are profoundly oblivious of what it entails to also "walk the walk". I started floundering around to try to figure out some sort of sure fire way to figure out whether someone was in the grip of some version of the "trance of whiteness" or whether they actually were (even if only vaguely) conscious.

I haven't come up with anything yet but I have learned that invoking the phrase white supremacy can sometimes be useful. If a white skinned person's eyes get big when they hear that phrase...I've found that it's often wise to be somewhat cautious with them because that suggests they haven't done much serious thinking/comprehending about the origin of this nation or about its subsequent trajectory.

The article linked to in this post is a demanding read (the author is a professor...so that's to be expected) but he ends it with a great and wonderful phrase: "even the boldest freedom dreams warrant our serious contemplation."

I second that admonition.

Clever of you to mention the term "White Supremacy" as a way to out those less conscious, Veganelder. I recently noticed this while talking with a small circle of students. They all approached voluntarily after a class and they seemed completely open and non-defensive, but the minute I used the term "White Supremacy," I saw an almost imperceptible collective flinch, a retreating into safer waters, a less open, more resistant stance. But I forgot about it until you wrote this. I'm glad to know I don't stand alone.

I've had several occasions wherein folks who are designated as people of color have evinced surprise (or even shock) that I was able (as an old white man) to (however poorly and/or dimly) convey that I grasped some of the terrible awfulness of how we white people behave (historically and currently).

This surprise disturbs me greatly because it's my belief that white people comprehending what's right in front of us should not be anomalous and/or unusual...and yet...I'm beginning to believe that it is.

Is it your experience that white people seeing through the fantasy of white "innocence" are rare? I own being woefully captured by white obliviousness...and I'm struggling to decrease it...but...I thought my ignorance was a function of my own deficiencies. I'm beginning to think otherwise. Your experience(s) would be appreciated...thanks.

(you can email me at veganelder@gmail.com should you prefer to do that)

Sorry to take so long to answer, Veganelder. Rough semester. My perspective on this in a nutshell is that those Ta-Nehisi Coates calls "people who have been taught to believe they are White" know damn well what's going on and why. It is absolutely impossible to ignore the daily murders of Black people by the police without any accountability in virtually every case. And that's just one garish example of a sociopathic norm.

In a nation where we all swim daily and all our lives in an ocean of White Supremacy, we are socialized to accept that there are "good reasons" for the poverty of huge communities of Black people, the awful conditions to be found in majority Black schools, the depression and violence manifested by young Black men, the insanely disproportionate representation of Black men in prison, and so forth.

In actuality, of course, these blisteringly visible realities are the direct result of 200-years of a White Supremacist ideology and practice that have never been hidden, but have always been "explained" to blame the victim and give "White" people a "get-out-of-jail-free" card (quite literally). It's not surprising that someone whose eyes begin to open and whose mind (and heart) begins to receive the truth will wonder what took them so long. And then they begin the painful process of continuing their evolution walking what Allan Johnson calls "the path of most resistance," a path along which they will encounter a range of disappointing to alarming responses among other "White" people.

I like to say, "You can't wake up a person who's pretending to be asleep."