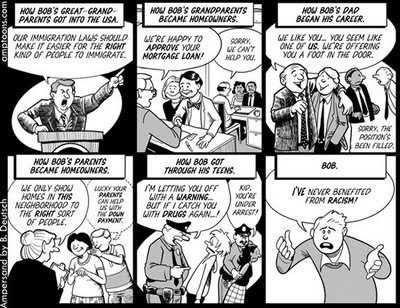 I've been thinking, talking and writing of late on the virus of White Supremacy that's embedded in every fair-skinned person raised in the good ole U.S. of A. Actually, I've been thinking, talking and writing on the virus of White Supremacy since at least 1963, so on some levels it just fascinates the hell out of me that I can't even imagine reaching the end of the process of its examination. Social change is constant and inevitable, so how, I ask, does this one area in American culture just seem to get worse and worse. It's not like we don't know about it (whatever White folks like to claim).

Sigh.
Anyway, I came across this a two part essay a few minutes ago and I'm going to post both parts together right here immediately. I'm not suggesting that this guy's got the topic sewed up or anything. But it's a good addition to the dialogue.
"My Name Is Ed. I'm a Racist."
by Ed Kinane/Truthout op-ed
Alcoholics Anonymous knows that recovery requires acknowledging one's illness; denial cripples recovery. What follows isn't about drinking, but about a more cunning disease. Before I say more, I want to introduce myself: "My name is Ed. I'm a racist."
No, I'm not flaunting my bigotry, nor succumbing to guilt. I'm acknowledging that I've been deeply conditioned by a society permeated with racism. For a white person raised in the US, racism recovery demands persistent mindfulness. It's the task of a lifetime.

Admitting you're an alcoholic is hard; likewise admitting to racism. Conveniently, our standard notion of racism features behavior we avoid. We "know" we're not racist because we shun ethnic slurs; we wince at the N-word.

The flipside of this (necessary but insufficient) standard is our widely held, but rarely examined, notion of anti-racism. Again, we "know" we're anti-racist because, in my case for example, back in the eighties we organized against South African apartheid. Or because recently we contributed to Haitian earthquake relief.

But such notions of racism/anti-racism don't go deep enough. It takes work to fathom racism's breadth and subtlety and to perceive the social and economic forces fostering the de facto segregation that warps our social fabric.
Equally essential, we must recognize and resist the racism pervading US foreign policy. The Pentagon's current military adventures - whether in Iraq, Afghanistan, Pakistan, Yemen or Somalia - were foreshadowed, in the 19th century, by relentless Indian wars and by US invasions of Mexico and the Philippines.
This generations-old war machine has never had much use for the lives of peoples of color. It's no accident that its numerous invasions and interventions invariably target nonwhite people.
______________________
In my first 14 years of school, I had only two black classmates; despite over 18 years of schooling I never had a black teacher. I was 19 before I had a personal conversation with a black person. My early college days were spent in a lovely ivy enclave set off by walls and rent-a-cops from the black and brown ghetto at its gate.
Demoralized by the irrelevance of my courses, I dropped out. Thanks not only to family connections, but also to the sixties building boom in my hometown, I could work construction. In Syracuse's 15th Ward, "urban renewal" drove thousands of blacks out of what was becoming prime real estate. The forced relocation demolished a vibrant black ghetto.
Despite that boom, few blacks could break into the construction trades; there wasn't a single black in our union local. None of us challenged the arrangement. Forty-five years later, not much has changed here: few black contractors can bid on even modest building jobs.
It's no wonder that in the early eighties, when I hitchhiked through South Africa, it seemed like home. And last spring when I spent a month in Israel and the Occupied Territories, that European colony also felt like home.
Basic to these segregated societies and to our militarism is what poet Adrienne Rich calls solipsism. In philosophy, solipsism is the theory that the self is the only reality: you exist only as a figment of my imagination.
Rich speaks, in particular, of white solipsism: a cultural egoism, which assumes - quite unconsciously - that only white history or discovery or suffering or interests have merit and standing. Most white folks - whether in South Africa or Israel or here - grow up in white neighborhoods going to white schools and consuming white-controlled media. This is how we internalize white "reality."
For many of us, the solipsism that denies or demeans or destroys did not originate with racism. It began, historically and personally, before we were exposed to ethnic diversity. While being molded for roles defined by gender, boys acquire the parallel male solipsism of a patriarchal culture. Sexism precedes racism, grinding the lens that makes our racist outlook second nature. Sexist behavior provides an ongoing rehearsal for our racist performance.
When we were young, we had little control over our enculturation and so weren't to blame for such tunnel vision. But now that we're grown, we are responsible for the kinds of callousness and exclusivity we choose to honor. Many of us eagerly - or obliviously - float along the mainstream that invalidates the lives of people of color. Their labor and their living conditions, their needs and their pain, their gifts and their rights, are systematically negated, rendered invisible, rendered mute.
______________________
White solipsism helps explain the foreign policy double standard which regards only political violence aimed at whites as "terrorism." Since World War II, few whites have been victims of aerial warfare: no wonder few here see such warfare as the cowardly terrorism it is.

Although the pundits glibly link "terrorism" to Islam, they never call Congress or Bush/Clinton/Bush/Obama terrorists when they squander billions invading Islamic oil lands or when (say) US drone aircraft assassinate those resisting the invasion and occupation. Or when those unmanned drones kill civilians willy-nilly.

That is a very good read. You don't hear too many whites admitting openly to racism, and it's a sharp parallel with that and being addicted to drugs or alcohol.

I've been working in our city's children's hospital, located in a poor neighborhood, for the last 4 years. This year our department adopted a class in the neighborhood school. Between the work we've done in the school and the things I've learned about the hospital's work to reduce the infant mortality rate, I've begun to peel back the tape on what I thought was racism to peek at what lies underneath... systemic separation and abuse of power. This article confirms what I've seen. It's breathtaking and overwhelming. There are no easy answers, but it gives me much food for thought, especially as we raise our children and try to break down some of the system's walls for them, at least a little.

I agree, Will. The comparison to addiction puts racism (and its effects on the racist as well as those around him or her) right up there with other forms of insanity. Where it belongs.

Joy: Your comment highlights what I so often write on this blog. People who want to "get" it will find a way to learn. And those who don't want to know won't, no matter how long you talk. You can't wake up a person who's pretending to be asleep. And you can't hide the truth from one whose eyes have been opened. Welcome to my world. And thanks for your comment.