Can A White Land Be Killed? 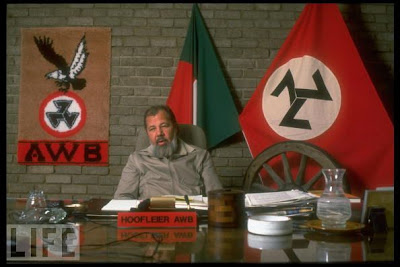 Yesterday, I was writing about transitions. Transitions can be adventuresome (such as mating) or daunting (such as finding out you are about to have your pay cut substantially without, needless to say, any expectation that your workload or your work ethic will be altered in any way). But sometimes, they are grossly disappointing.

I posted about this too. My SA coworker now informs me that the the AWB is threatening the SA government if they bring in any teams for the World Cup.

So, naturally, I foresee more hackings and bludgeonings of AWB members over the next 10 weeks.

And honestly...I'm fine with that.

I strongly believe that even though apartheid fell in South Africa, it doesn't mean that the racism and white supremacy fell with it. Whites have and will have negative views toward blacks no matter what bills have been passed or what laws have been repealed.

I also think that the effects of white supremacy will not go away either just by passing bills and destroying a supremacist system. They are small steps toward healing which I doubt very much that America will do because racism helps fuel capitalism.

Not only do whites want to avoid the fact that racism exist but they also don't want to lose the powers, wealth and privileges that came with it. To do so, according to many of them, would be communist or socialist, two of America's dirtiest words.

Will, I agree that passing legislation does not simply wipe a problem away but I think the context surrounding it deserves more attention. You said it yourself that racism helps fuel capitalism and because our system is run by capital it is counterintuitive for it to legislate against its own interests, so when laws are passed it has to because a large independent movement is demanding it - so much so that it has become dangerous for capital to maintain its desired status quo. So no, legislation is not destroying racism - I think because racism (albeit very, painfully, slowly) is being destroyed, it makes creating such legislation politically viable.

Moi, strong voices are always welcome and yours is strong, indeed. I visited your blog and loved it. So it has been duly added now to my blog roll. Welcome to the neighborhood and please feel free to drop by anytime.

I agree, Will. Until institutions have been stripped of all the oppression embedded so systematically within them, nothing will change. It's not just political; it's cultural. Besides, internalized racism (one manifestation of which is "colorism" among Black peoples themselves) helps to carry the infestation of oppression even beyond the death of its original host.

Additionally, as you note, racism and capitalism (as do sexism and capitalism) dance hand in hand around the floor of life in the U.S. and in the world overall. MUCH money is made through knee jerk distribution of resources primarily to and through the White male power structure.

Tinsmith, I don't clearly understand your main point here. However, I'm not so sure "capitalism" runs anything. Capitalism is an economic system and a driving force, indeed, but it's being wielded by humans who have more than one agenda, I think (though it's profit-motivated for sure). Given the money and power now concentrated in the hands of literally only a few thousand people in the world (a thousand billionaires having arguably the same approximate wealth as the better part of the rest of us), I don't think "large independent movements" are necessary any more to accomplish much of anything. This works for and against us. It doesn't take many of them to do massive, terrible things (and they're insane), but it is also possible for fewer of us to accomplish much. And "they" know it.

Check out Michael Moore's new flick "Capitalism -- a Love Story". I just saw it and, I must say, it gives one much food for thought.

CS,
I was referring specifically to Will's second comment and perhaps I was being too nit-picky because I entirely agree with him but because I wanted to participate in discussion tried to take a nuanced look at what he said and further disect it. I wasn't trying to make the point that "capitalism" runs anything, but rather "capital" itself does. One of the ways capitalism creates the prospects for competition based exchanges is to divide people. One extremely productive (from their point of view) way to create this divide is to use race. Because this works so well for capitalism, it is against capitalism's best interests to legislate against racism like what Will described when he talked of "passing bills and destroying a supremacist system." That such an event does occur has to because operating on the status quo has become dangerous or impossible to maintain such as the evnts that lead capital-controlled politicians to pass civil rights legislation. That it takes fewer of us to raise issues as you mentioned is an example of newer forms of organization which are amorphous and continuously evolving, but I still believe that in order for change to be legitimate (in the eyes of society) it requires large forces of solidarity. The forces of the status quo understood this when they organized the Tea Party protest and they were successful in creating the appearance of mass civil unrest and made the healthcare bill untouchable and ultimately poisonous.

We should fight for reforms the likes of which Will mentions, because in the words of Michael Lebowitz, "Marx did not think that there was anything about a movement to end capitalism. People may struggle against specific aspects - they may struggle over the workday, the level of wages and working conditions, capital's destruction of the environment, etc [in our case racism and white supremecy] - but unless they understand the nature of the system, they are struggling merely for a nicer capitalism, a capitalism with a human face." This completely backs up what Will is saying. What I was trying to expand upon was that in order to raise the consciousness of the people we must fight for the "human face" to show those that have not imagined a world beyond our current problems that one is possible. It is in those legislative victories that we awaken those who will take it beyond.

Sorry this was so long, I just wanted to try to make myself clearer.

"...anything *automatic* about a movement to end capitalism..." that should read

i think S.A government should take step on this

Well, yes, indeed, Mr. Snow. I hear you clearly NOW. ;^) And yes, I do agree on all points. Edna Bonacich's "split labor theory" describes how divide and conquer is used to befuddle and engage workers in such a way that some of them help to keep the others down because they've been counseled they're "special" (whether the group with the extra benefits is White or male or both, as one example). While this is going on, of course, those with the power to define (and own) are so far above both groups as to be virtually untouchable without class consciousness and solidarity developing.

I would also suggest that passing laws is good, but not very helpful if they're not enforced. This is where the rubber meets the road and is precisely the reason women still make less than men even though the law says it's illegal for that to happen. For that matter, the U.S. Constitution is VERY clear about the sanctity of inalienable rights which people of color and LGBTQ folks still have routine difficulty exercising as full citizens.

Thanks for clarifying. That was good stuff.

Term Papers: My understanding is that the AWB has decided it would be in their best interests to sit down and shut up -- without government intervention. Sounds like a good plan to me.