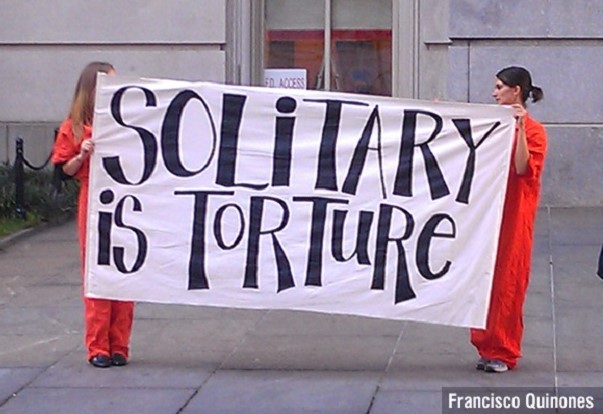 In 1971, when I first started haunting the doors of the prisons of this country, it didn't take long for me to hear about solitary confinement and the extraordinary ways it was sometimes being used. Unrest was rippling across America like a swarm of rabid locusts and the Powers-That-Be at the top of the prison food chain were dealing with "criminals" the likes of which they were unaccustomed. There were still bank robbers, of course, but sometimes now, they were committing their crimes to bankroll a group protesting the Vietnam War or police brutality. And the Black Panther Party had offices in 68 cities serving thousands of members. Folks at the top were worried -- and even scared. And not without reason.

Alcatraz had been closed eight years before with the prisoners showing up at Marion Federal Pen in southern Illinois, a new kind of prison for prisoners deemed "incorrigible" or "sociopathic" (both of which terms we knew meant "won't bow to authority"). As members of the Black Panthers and other politically-conscious groups hit the tiers, though, it became quickly apparent that this new breed of incarcerated citizens were not only dangerous because they would punch a guard where it hurts the most, but because they were smarter than the guards and even, in most cases, smarter than the wardens. They had read Mao and Marx and Lenin, as well as books by prisoner intellectuals like George Jackson. They held political education reading groups inside that quickly caught on like wildfire. They organized groups of resisters and modeled how solidarity between the groups would make it possible to fight the authorities instead of each other. It was a new and exhilarating era.

Then Attica upped the ante and it was on.

At the Federal Medical Facility in Springfield, a "voluntary" "special treatment" program called S.T.A.R.T. was using behavioral modification techniques that involved chaining men naked to their bed racks without a mattress, making them eat off a tray on the floor with their hands handcuffed behind them, and the use of an assortment of psychotropics with a whole range of nasty effects. We sued and they ditched the program because it had "proven to be too expensive to run." They said.

So nobody in our collective was surprised to hear that a conference for wardens from coast to coast featured a doctor who had conceptualized a new psych program at a federal prison in Butner, North Carolina. "Go home to your prisons," he was quoted as having said to his audience, "and try things until you figure out what works. Then, let us know what you learn."

By the time we had heard of Butner, we understood that a warden could only get away with so much (legally). But a doctor could "prescribe" any kind of "treatment" in the "best interests" of the "inmate" -- and for as long as the doctor deemed necessary. And, move after movc, the hellish chess game continued.

Ultimately, of course, the Supermax (or versions of it) appeared as the Powercrats' default position. ("If you can't break 'em and you can't change 'em and you're not supposed to kill 'em, you just put 'em in a box with no natural light and no contact or conversation and throw away the key.") The fact that this has been called torture by experts of all kinds around the world and all the way up to Amnesty International is irrelevant. Powercrats don't care. They're not acting in the best interests of the society. They're not concerned with legality or "rehabilitation." They're not committed to morality. They have lost their moral compass. They have gone to the dark side and become worse than criminals. Their souls have died and their bodies are holograms of evil.

The standoff that has developed was predictable. They sit in the seats of power as if they are untouchable. Their minions -- some of whom can barely read or write -- mill up down inside institutions wreaking havoc at will as if it gives them pleasure. And those who have not yet drunk the kool-aid seldom report the nightmares they witness because the rule of law has been locked up in its own tiny box, padlocked behind chains of official corruption, judicial disdain, and public exhaustion. Incarcerated men and women and even children lie trapped in conditions that would bring tens of thousands to the doors of these institutions if the cells held dogs.

One of my closest friends is Albert "Shaka" "Cinque" Woodfox. He did 43 years in solitary confinement in the state of Louisiana, ostensibly for killing a guard (who he did not kill), but actually for being a Black Panther. I had the honor of visiting Albert for seven years before he was released in 2016 and -- if need be -- I would absolutely have visited him until one or the other of us was dead. I will always be grateful that was not necessary.

Albert is now the proud owner of a home in the 9th Ward of New Orleans. He and the love of his life (who he met decades ago when she interviewed him for Pacifica Radio) travel the world while Albert talks about the ravages of solitary confinement, working tirelessly to make them a thing of the past. He told me years ago that this would be his commitment when -- and if -- he was released. "There are people buried deeper than me," he said.

Because of this commitment, Albert refused to settle with the State and leave the last institution in which they held him until they signed an agreement to stop using solitary the way they used it on him. They haven't, of course. Which is why he continues his campaign. His book, Solitary: Unbroken by four decades of solitary confinement. My story of transformation and hope., hit the bookstores in March and was on the New York Times Best Seller List two weeks later. It is now on the list to be considered for the National Book Award, one of the most prestigious awards in publishing. Next year, they will begin shooting a feature-length film about Albert's life, with two-time Oscar winner Mahershala Ali playing Albert.

Still, the nightmare continues for many. The suffering continues and so the prison abolition work I have been doing for so long continues, too. My work at this point in time focuses almost entirely on the struggle in Louisiana where they incarcerate more people per capita than any group ever has in the history of the human race and where Angola (with 6,300 incarcerated citizens -- 80% of whom are Black and 75% of whom are doing Life Without Parole -- on an 18,000 acre plantation where Black men still pick cotton from dark to dark for 4 cents an hour) is arguably the flagship prison in America. But I am personally in contact with prisoners in five other states and pay close attention to what is happening all over the country and, for sure, solitary confinement has become a principal characteristic of mass incarceration and must stop. It is not enough for those of us on the outside to stand for prison abolition. We must fight against this cancerous practice until it has been uprooted and the roots burned.

Yesterday, I re-posted a letter published by the San Francisco Bay View from Keith "Malik" Washington to the prisoners in South Carolina. Today's post was inspired by that letter. So here is my own to add to it.

TO THE PRISONERS IN SOUTH CAROLINA
AND IN SOLITARY CONFINEMENT ANYWHERE:

We know you are suffering considerably under your current conditions. How could it be otherwise? That is not a sign of weakness. It is a sign of your humanity.


The Powercrats want you to break under the pressure they are continuously applying to you physically, psychologically, and emotionally. The combination of the heat, the lack of mental stimulation, and the anxiety they want you to feel over the uncertainties of your future are exactly the effects they are seeking to produce in you.

You have dealt successfully with one challenge after another – challenges that would almost unquestionably have proven too much for most people. Yet your strength, wisdom, common sense, humor, and spiritual depth have brought you through every difficulty, no matter how demanding. These traits have not abandoned you. If you reach for them, you will feel them and know for a fact that they can continue to deliver you from the effects of your hellish circumstances – just as they have done so far.

I just recently finished reading Albert Woodfox’ book Solitary: Unbroken by four decades in solitary confinement. My story of transformation and hope. The following quotes appear in it:

Nelson Mandela wrote: “Prison is designed to break one’s spirit and destroy one’s resolve. To do this, the authorities attempt to exploit every weakness, demolish every initiative, negate all signs of individuality – all with the idea of stamping out that spark that makes each of us human and each of us who we are. Our survival depended on understanding what the authorities were attempting to do to us and sharing that understanding with each other.”

Albert Woodfox wrote: “One must never hope to escape the battle without setbacks or injury. The art of a great soldier is not in his ability to fight, but in his ability to maintain his dignity, pride, and self-respect, and most of all, his humanity in his darkest hour!”

To one of his supporters who asked him how to be brave, Albert wrote: “I write to you to pay tribute to and salute your courage. I embrace your courage. I lie down every night loving your courage. When I am in need of purpose or focus, I think of your courage. Courage is not an ongoing thing that you walk around feeling every day. Like anything in life, it comes and goes with the challenges we meet every day of our lives.”

“They tried to bury us. They did not know we were seeds.” (a Mexican proverb used by the Zapatista movement)

"I Wait"
by Albert Woodfox


Look behind you, brothers and sisters, not just to when you entered prison, but all the way back to your beginning. Remember all you have survived and how it has honed you to become who you are now. Prison is an institution dedicated to the application of pain. See the pain come toward you. Watch it enter you and watch it pass from you. You are who you are and all the ugliness in the universe cannot lessen the beauty life has manifested in your soul.

I called Albert Woodfox before I wrote this letter and asked him what he would tell you himself if he was there and he sent this message to each and every one of you:

Posted by changeseeker at 11:53 AM