South Carolina Prisoners, Stay Strong! We Got Your Back! 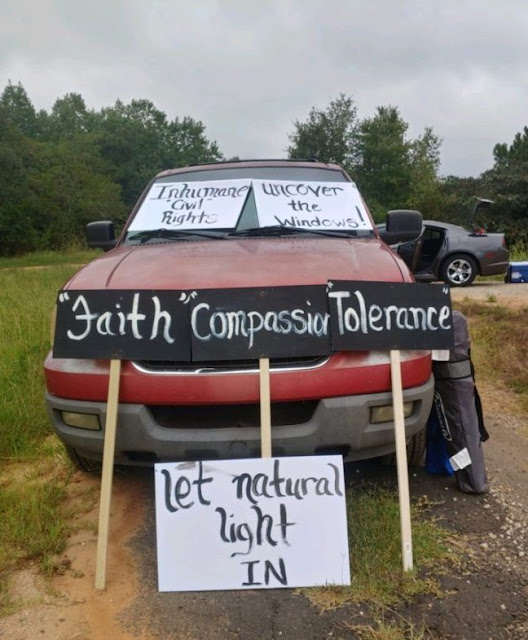 The United Nations recognizes as torture all solitary confinement for more than 15 days. Lockdowns, amounting to solitary confinement and therefore torture, are group punishment, undeserved and infuriating. Add to that steel plates covering cell windows. The denial of a view of outdoors and of all natural light is described as torture by prisoners in windowless supermax prisons like the dreaded Pelican Bay SHU in California. Here, prisoners’ families, worried that the oppression may become intolerable, protest outside Perry Correctional Institution in Pelzer, S.C. – Photo: FitsNews

Revolutionary greetings, Comrades and all fellow workers throughout the world!
It seems like only yesterday when we all heard about the bloody riot that occurred at Lee County Correctional Facility in South Carolina. Too many of our incarcerated comrades died.
I remember the call that was made for a National Prison Work Stoppage in 2018. I didn’t hesitate to answer the call. Our comrades at the Incarcerated Workers Organizing Committee did not hesitate to answer the call or lend their support. Amani Sawari and her comrades from Jailhouse Lawyers Speak were on the front lines of the struggle for human rights.
I knew the real reason for the work stoppage.
I knew about the inhumane prison conditions in South Carolina. I knew that the state prison officials were attempting to control the narrative that was fed to the public at large. They claimed that the violence at Lee County was all about drugs, cellphones and turf wars.
The warriors and freedom fighters at the Free South Carolina Movement reminded all of us what the oppressors were attempting to suppress. The oppressors forgot to mention the lack of rehabilitative programming in South Carolina prisons.
They forgot to say anything about the squalid living conditions and the deadly extreme heat which is killing prisoners right now. They forgot to talk about the antiquated and bigoted criminal justice system which continues to manifest and perpetuate a program of modern day slavery. The spirit of Denmark Vesey lives! George Jackson lives!
Today, the oppression has, if anything, intensified. Many prisons are still on and off of lockdown TWO YEARS after the riot at Lee that touched off the 2018 prison strike. Friends and family of loved ones in South Carolina are organizing – the current demand is for removal of the steel plates installed over all the cell windows in some institutions, denying all natural light for the duration of the lockdowns – but change is slow and folks lose hope.
The oppressors who operate these slave kamps in South Carolina need to know that the struggle for freedom, justice and equality for all is alive.
We demand dignity, respect, and humane treatment for our comrades in South Carolina now! Locking human beings in cages for months at a time is not rehabilitation – it is torture!
Congressman James Clyburn must be encouraged strongly to get involved here. We don’t need any Jeffin House Negroes or Step-N-fetchits! We need servants of the people!
Presidential candidates Bernie Sanders, Corey Booker and Elizabeth Warren as well as Kamala Harris had some strong words in regard to criminal justice reform at the most recent presidential debate that was held in Houston, Texas. Well, now they all have an opportunity to put some “muscle with they hustle” and show us what they talkin’ about.
Speak out right now about what is happening to the incarcerated human beings trapped in these slave kamps in South Carolina! Or were they just rappin’?
Comrades, the struggle for human rights and prison abolition is a protracted struggle. There will be ups and downs. Make this message go viral, y’all! Let’s see what these politicians are really about.
Dare to struggle! Dare to win! All Power to the People!
*Keith “Malik” Washington is co-founder and chief spokesperson for the End Prison Slavery in Texas Movement, a proud member of the Incarcerated Workers Organizing Committee and an activist in the Fight Toxic Prisons campaign. Read Malik’s work at ComradeMalik.com. Send our brother some love and light: Keith “Malik” Washington, 34481-037, FCC Complex USP, P.O. Box 26030, Beaumont TX 77720.

NOTE: This communique was first published in the San Francisco Bay View.
Posted by changeseeker at 8:02 PM