The Personal Is ALWAYS Political

I've always heard that Emmett Till, at 14 years of age, was lynched in ghastly fashion because he whistled at a White woman. Actually, the trial transcript says she testified in court -- meticulously and in detail -- that he grabbed her hand and then grabbed her body, telling her outright that he wanted to have sex with her. Now she says she lied.


She was 21 when the event supposedly took place. She and her husband had two children already, the oldest of which was three. This means that she was 16 or 17 when she got pregnant the first time. According to the dates given in her testimony, Roy Bryant (her husband) enlisted in the armed services at 19, got Carolyn pregnant when he was home on leave (which would have been grounds for a shotgun wedding), and he didn't leave the service until 1953 after the birth of their second son.

I'm just guessing, but I was born in Kentucky in 1946 and I have a certain understanding of traditional life in the South. Bryant (being a "handsome" Southern man who had been forced into marriage young) doubtless used his time in the service to do what he wanted sexually and he was likely uninterested in changing that pattern when he came back home to Mississippi.

Carolyn, on the other hand, who had never left and had already been forced by circumstances (and her family, I'm sure) to sacrifice her youth to having and raising children, had limited skills to hold his interest, if Roy was not ready to "settle down." Unless, of course, she could find a way to challenge his manhood related to her as his "property."


She testified that on the night in question, her husband was in New Orleans "on business" and she didn't know when to expect him home, while she was strapped with two small children and stuck behind the counter of a general store in a small Southern town where most of the customers were Black. If she suspected (or knew) that hubby was running around on her, she had to act fast -- or accept that this whole arrangement was going to be permanent.

I know much of this is just conjecture, but I've been fascinated lately by the photo of the two of them in the courtroom. Carolyn is looking adoringly up at Roy's face and he's looking elsewhere. I'm just sayin'.

What do I think of what Carolyn Bryant did? I find it disgusting. She sacrificed Emmett Till's life in a horrifying way in what was likely an attempt to cement her relationship to a man. It makes me think that the rage many Black women feel toward White women (in general) is -- if not always entirely justified -- entirely reasonable. And I sometimes hate that I look like one of them.

Do I think she should go to prison? My first reaction was, "Damn skippy." But the longer I think about it, the more disgusted I become, the more I wonder sadly what difference it makes.

Everybody in that courtroom and probably everybody in America knew Carolyn Bryant wasn't raped. It didn't matter. Her lies (first to her husband, then to the cops, then to the media, then in court) were the excuse a White Supremacist culture welcomed to further normalize the practice of torturing and taking the life of any Black person on this planet at any given moment -- randomly and for no reason at all. Without this get-out-of-jail-free card, White power will not continue.

It wasn't about The South. It wasn't about Manhood. It wasn't about protecting the sacred chastity of White women. It was about cold-bloodedly reinforcing the idea that no Black man, woman, or child would ever be safe in this country as long as the power is held by the White Supremacist patriarchy. This unmitigated and unapologetic brutality is necessary to keep the status quo. And the closer we get to having "White" people be a minority in this country, the more frantic White violence becomes.

This, then, is why all hell breaks loose whenever Black people start talking about having the constitutional right to defend themselves. The White male power structure isn't afraid Black people are going to stage a violent over-throw. It would be a suicide mission. But White Supremacy cannot hold the power and privilege in this country once it is acknowledged that any citizen has a right to defend themselves. This is why the FBI has developed the label of "Black Identity Extremist." They pretend that it's about Black people being dangerous to White people. Actually, it's about White people not being allowed -- with impunity -- to be dangerous to Black people. And that's where the rubber meets the road. 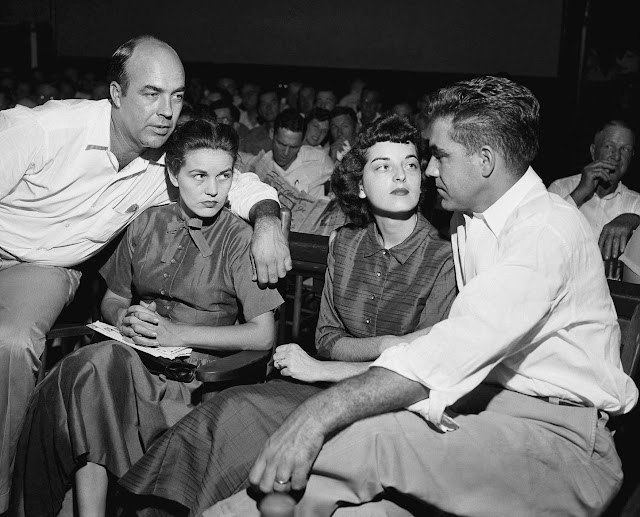 Posted by changeseeker at 11:09 AM