Can A Nation Divided Against Itself Stand? 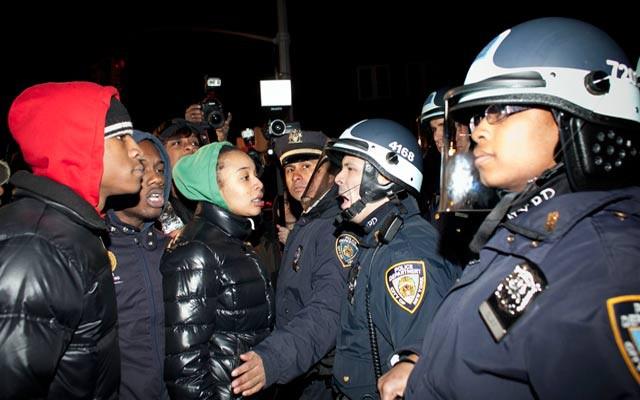 I was recently criticized for “rushing to judgment” against cops in general by calling Alton Sterling’s death “untimely and wrongful” and then accused of doing this to benefit myself. The person who brought the criticism missed the whole point of a letter to the editor I had written, which was not anti-cop at all, but only meant to invite White people to join me in trying to address a system based on an ideology that is clearly threatening our common good as a nation.


I’ve worked with, talked with, interviewed, and counted as friends too many police officers to lump them all into one basket. They’re humans just like the rest of us. They bleed when they’re shot. They get scared when they go on a call. Some bring more skills to the table than others. Some make mistakes. And some break the law.


My critic said I should have mentioned that they also die in the line of duty. And certainly what happened in Dallas last week demonstrated that in horrifying fashion. In truth, 26 officers have been killed so far this year. But research tells us that even though 8 out of 10 of those cops were killed by White men, police officers are far, far more likely to kill Black people – men, women, and children, often unarmed and unarrested – than they are White ones. In fact, police officers in America have killed upwards of 150 Black people in 2016 alone (roughly one every 31 hours), which is 24% of those killed, though African-Americans make up only 13% of our country’s population.


Police officers are professionals. It’s not difficult to find film clips or photographs showing them doing a remarkable job of not killing people who are threatening or even shooting at them – as long as they are White. And anyway, according to The Badge of Life, a highly respected police organization, more than twice as many police officers died by suicide in 2015 than were killed by felons.


Regardless, my letter wasn’t about any of that. It was about White Supremacy.


I’m White myself. And for more than five decades now, I’ve been studying, learning, writing, and speaking about White Supremacy – which is, in its most basic sense, the misguided idea that people with “White” skin are superior to the rest of the human race just because of their skin tone and deserve, therefore, to live their lives as privileged people.


It makes about as much sense as saying that humans with a second toe longer than their first toe should be treated better than everybody else. Yet it’s how Europeans rationalized killing off an estimated 50 million Native Americans to take their land, stealing a third of Mexico by force, and building an entire and very rich nation on the backs of African slaves for 250 years.

Then, having established their position of dominance using such unmitigated violence, they stacked on top of all that history laws, public policies, and social practices that made sure they would hold onto the most of the best and suffer the least of the worst as permanently as possible – still based on their skin tone (something over which none of us has control).


Since we are all socialized under this ideology from birth, no matter what we look like, we have come to believe that this is normal – even natural – but it is not. And the most powerful manifestation of this ideology currently, of course, occurs when a police officer, a person we all trust with our lives every day, but who has been socialized under the same ideology the rest of us are raised under, crosses a line that is painfully visible to any who want to admit it.


Because our nation’s social institutions have all been established and maintained under the ideology of White Supremacy, it is unrealistic, at best, to hope that they will somehow not reflect norms that have been in place since the 1600s. Until the White Supremacy is addressed, this nation is in jeopardy of its destruction because White Supremacy – by nature – demands that the nation be divided against itself and, therefore, according to Abraham Lincoln, cannot stand.


This is my country. I’ve lived in it for seventy years. I want it to be the best country it can be for all its citizens. So I am against the ideology of White Supremacy.

Your critic outs himself (I'm presuming it was a white man) as being unlikely to be open to your message by his willingness to criticize. I'm struggling with identifying rubrics that offer a "quick and dirty" method to identify those who are willing to wrestle with their conceptualizations versus those who are committed to defending whatever viewpoint they possess.

Right now one that I tentatively use is whenever someone is bold enough (or whatever factor it is that provokes them) to criticize , especially without first accurately considering a message, then probably they're off in some thicket of misapprehensions that isn't productive for me to fiddle with. Too much trouble for too little return. I'm old and don't have much time left so I prefer to leave the tough ones for the youngsters.

I'm relatively new to finding my way out of this morass of white ignorance that I was socialized to believe was "knowledge" and one thing I've noticed is that using the phrase white supremacy spooks the hell out of many folks (mostly those racialized as white). It's a phrase that automatically (or so it seems) invokes notions/images of white robes and burning crosses and violent maniacs. Most white people don't do those things...or even think (consciously anyway) such ways and hence they resist greatly thinking that white supremacy has anything to do with them (even though it does). It's really remarkable in many ways (I include myself in those drenched in obliviousness and ignorance).

Terms like "white supremacy" and "racist" and "racism" have acquired such negative baggage that it's almost like using the term pedophile...people (white people especially) wig out and immediately devote all their attention and thinking and effort toward defense of themselves instead of consideration of what's being said. Truth and accuracy don't matter...defending their essential "goodness" becomes the primary focus.

It seems to come down to folks having the wherewithal to endure some discomfort (thinking about white supremacy and owning their participation in and benefiting from it) in order to arrive at a less destructive/harmful way of comprehending and behaving. It's a sticky wicket (one that reminds me of some of the dynamics that go on in psychotherapy). Often people come to therapy because they have distortions in their thinking/behaving that creates problems for themselves but to get out of problematic thinking/behaving they first have to own that they're in charge of that thinking/behaving and that's really hard for them because they see that as some indictment of their goodness or whatever. It's a dilemma that is really really hard to resolve. How much motivation someone has is one of the biggest predictors of how well they'll do at resolving their issues.

You might find this brief (about 20 minutes) video by Dr. Rose to be useful. In it she talks about the anxiety that's provoked by talking about the realities of race/racism/white supremacy and she offers a "pledge" that I thought was interesting as a way of addressing some of that anxiety. If you have time take a look at it...I would enjoy your feedback about it.

Note: while someone objected to your letter...what isn't known is how many read your letter and were prompted to do some uncomfortable thinking...that's the important part. Thank you for writing it and for your efforts.

Social media and realtime reporting are mirrors into the soul of a sick nation. The cynical media mantra "If it bleeds it leads" has aided and abetted the very worst among us by giving these vermin their wicked 15 minutes.

As a society, as a people, we are at the precipice of a point of no return. As a lifelong student of the country of my birth and its place in the world, I am convinced that we are more divided than ever. There is nothing united about the United States of America!

The cancerous growth that was conceived in this nation at its inception, the enslavement of human beings, raced unfettered through its willing host until the 1860's, a Civil War tumor that threatened to consume our democracy. (democracy for most Americans anyway)

Until the 1960's, the cancer masked its presence by morphing into both hidden and overt bigotry and racism, denial of voting rights, and murder by rope and the raping of an entire race's soul.

Bringing us to the present. The cancer appeared to be under control, manageable, until it erupted with a murderous vengeance. It has metastasized in the soul of America and the prognosis is extremely grim. What hope of a lasting cure have we left?

There is a radical new experimental treatment that could very well heal this patient. No, it is not a pipe dream or a panacea. It is a plan for healing this nation.

Will you join me?